Gunslinger Stratos is a third-person shooter with unique dual-wielding light-gun controls, featuring two gun controllers that can be fired separately or combined together into one or more powerful weapons. The light-guns also feature an analog stick to control the character movements along with buttons to jump and fly.

It is a multiplayer video game that can be played with up to eight players offline or more players online. Players can play up to 4 vs 4 team deathmatch modes, in realistic, fully destructible, urban environments modelled after actual cities in Japan. The characters are based on a range of anime and manga archetypes, from the teenage schoolgirl to the giant mech.

The game features hundreds of different guns which can be purchased using a point system and can save data using a NESiCA card.

The game was developed by Byking and Bee Tribe, using Silicon Studio's Orochi Engine. It uses the Yebis post-processing effects middleware, along with the Havok physics middleware.

The scenario was written by Norimitsu Kaihō of Nitroplus, while the CGI cutscenes were rendered by Square Visual Works.

The game received an update in 2013, adding a new character called Srinivasa, a blind musician from India who uses ultrasonic technology to see.

The game made its American debut at the Game Developers Conference in March 2013, temporarily released by Silicon Studio to demonstrate their Yebis middleware which the game utilizes. The game did not receive a nationwide release there.

The success of Gunslinger Stratos has inspired an anime adaptation, which was previewed in 2013. It will begin airing in 2015. 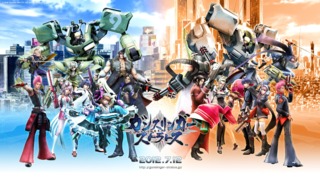