Born of different worlds, woven together by fate, each shall rise to face their destiny.
PlayStation 2

Grandia II was developed by Game Arts with additional services provided by many companies in specific parts of the game, aka CG production. Additional help was provided by employees of IKUSABUNE, Shirogumi, Xeonix and Studio Deen, for CG animation.

Grandia II was released for the Sega Dreamcast on August 3rd, 2000 in Japan. Later releasing on December 6th in the US. It was a traditional Japanese Anime-style RPG. As well as being noted for its then state-of-the-art 3D graphics, Grandia II is perhaps better known for its combat system, as some people claim it was the influence behind Final Fantasy X's own battle system.

It was later ported to the PlayStation 2 and PC in 2002. Although the Dreamcast version is considered the better of the two due to technical issues present in the PlayStation 2 port. A Steam version of the game will be released, published by GungHo Online Entertainment. This release will feature both mouse and keyboard and gamepad support as well as Steam achievements and Trading Cards.

The gameplay is unique from a typical turn-based RPG. It combines elements of real-time fighting and turn-based attacks. This allows battles to be faster paced while adding another level of complexity to the fight. Grandia II employs a bar to show how long the character has to wait before making an attack, while allowing the player limited movement during the battle.

Since there is real-time and turn-based elements in the fighting it also means that there are more stats to grow for the character. For example there are two forms of speed in the game: how fast the character can attack, and physically moving to the enemy and attacking them. The time in which it takes a character friend or foe to perform their attack is called the "act".

The ability to cancel an enemy's attack can be used to great advantage, but the key is timing and being able to figure what special attack is about to be done, how long it takes, and if the character can physically make to the enemy and hit them in time.

Strategy comes into play as a player has to decide which attack to use to best time his attack hitting the enemy within that short "act" period. By doing so the enemy's attack will be canceled or delayed, allowing more characters to attack the enemy and cause greater damage. Later in the game as players level up their skills, the ability to instantly perform attacks adds greater emphasis on delaying attacks, as most Boss battles become more difficult.

Magic in the Grandia series is learned by equipping items called mana eggs. In this game different types of eggs existed usually containing 2 to 3 elemental types per egg. These elemental types determine the magic spell the egg could use. Magic can also be leveled up which allows for faster casting and more damage.

Initially rude, with a very sarcastic attitude, he later comes to terms with the causes of his bitter behaviour through the course of the game. He is usually accompanied by his bird, Skye.

Mild-mannered, polite, and devoted to her faith, but she can also be quite spirited at times. As a result of this, she often clashes with Ryudo.

While showing an understanding far beyond his years, he still approaches a lot of common things with childish curiosity and surprisingly good manners.

A noble beastman on a quest for revenge after his village was attacked by a merciless superhuman.

Created during the war of the Gods some 10,000 years ago she is initially an emotionless being only there to serve. Although through her experiences with Mareg she begins to understand the nature of what makes humans, human.

The story starts as Ryudo the Geohound (a kind of mercenary), along with his bird, Skye, accepts a mission to accompany Elena, a songstress of Granas, as she heads to Garmia Tower. As luck would have it the mission turns into much more as an accident occurs at the tower which will require Ryudo and Elena to work together.

As they travel around the world they struggle to uncover how Valmar, the Dark God, is once again wrecking havoc on the land. You see the pieces of his body have been sealed away using the power of Granas, the Light God, to prevent Valmar from returning again.

The Dreamcast had a Limited Edition of Grandia II (Grandia II: Special Package) that came with an audio CD titled "Grandia II: ~Melodia~". It consists of 7 songs not on the original soundtrack:

Final Fantasy VII The Granstream Saga Arcturus: The Curse and Loss of Divinity 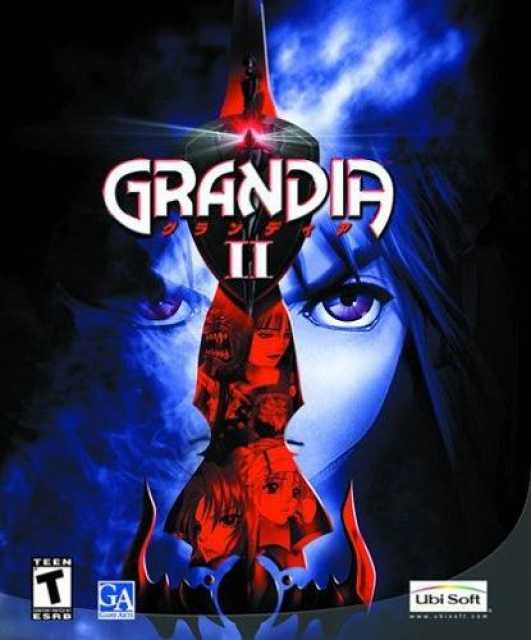