Planetarian: The Reverie of a Little Planet

Planetarian is a Japanese post-apocalyptic visual novel developed by Key and released for PC over the internet on November 29, 2004.
PlayStation Portable PlayStation 2

Told from the perspective of a middle-aged scavenger ("the junker,") Planetarian: The Reverie of a Little Planet is an unconventional visual novel that offers the player no choices or alternate endings. There is only one storyline and one ending, defined as a "kinetic novel" by its developers and was the first entry in a series of games published under the KineticNovel brand name. Other than the protagonist and narrator, there is only one other character - Yumemi Hoshino - a vicarious android attendant designed to appear as a young girl for the purpose of working in exhibitions of a defunct planetarium.

The game was developed by Key and written by Yuuichi Suzumoto, a scenario writer on several previous Key titles including Air and Clannad. Visual Art's initially published Planetarian on Windows PCs as a digital download on November 29, 2004 and would later be published physically in 2006, containing full-voice acting for the heroine. Prototype ported the title to various platforms including the PlayStation 2 in 2006, PlayStation Portable in 2009 and the Nintendo Switch in 2019. Visual Art's also created mobile versions of Planetarian in 2011 and an HD release for the PC in 2016, which contained higher resolution visuals. Planetarian was eventually adapted into an anime mini-series by David Productions which released online in 2016.

Planetarian was first translated into English unofficially by a collaboration between two fan translation groups, Insani and Haeleth, on February 28, 2005 and later saw an officially localization in 2013 as an English script update to the iOS release of Planetarian. Sekai Project would published Planetarian through Steam as well on November 29, 2014 and Prototype released their Switch port on the North American eshop simultaneously with the Japanese release on January 31, 2019.

This poignant tale tells the story of the scavenger in a dead city who stumbles upon Yumemi Hoshino and the planetarium - two of the last remaining symbols of the time before the post-apocalyptic reality in which he lives. While learning more and more about the past as Yumemi recounts her many stories from her history with the planetarium before the fallout, the junker's curiosity brings him to begin a pursuit of repairing the planetarium projector so that he may witness Yumemi's exhibition proper and catch a first-hand look at an experience that marveled others long before his time. 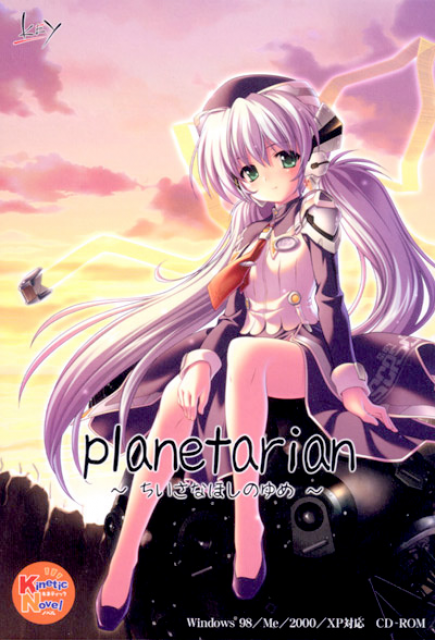