Choose from eight different characters and do battle in large environments, picking up weapons and collecting Power Stones to transform yourself into a super warrior capable of massive damage.

Power Stone is a fighting game for the Sega Dreamcast. The gameplay is unique in that it takes place on a full 3D plane, with various items and hazards strewn about. The game was released on September 31, 1999.

"Hailing from the town of London, noble Falcon circles the world in his airplane "Hockeneim." He searches for the Power Stones which were revealed in an ancient family legend. Falcon has a strong sense of justice. He specailizes in boxing and destroys evil with sharp moves and explosive punches. Falcon is a balanced fighter with neither the flesh of outstanding strenghts or the drawbackof outstanding weaknesses. During a power change, he gains powerful moves for both close and far range combat."

"Rouge, the Gypsy fortuneteller, is both mysterious and graceful. Guided by signs in her crystal, she travels the world collecting Power Stones. She has a unique ability to control flames at will! Her fighting style is mesmerizing: she moves as if dancing and chars her opponent's body and soul with her flames. Though her normal attack and defense abilities are relatively low, Rouge's flame attacks have long range and inflict severe damage. She runs more quickly than many of the other fighters."

"A master martial artist from the town of Tong-Ang, Wang Tang is following his teacher's advice and seeking Power Stones around the world. Always optimistic, Wang Tang is second to none in Kung-fu skill." Wang Tang's merit is outstanding agility. His successive moves don't allow opponents to catch their breath. He is also excellent at special actions such as wall-climbing. He floats like a butterfly and stings like a dragon!"

"Ryoma's original home is an island country. Since no islander could compete with his skill, he tours the world seeking out tougher opponent, he cuts the enemy down instantly! Thanks to his katana, Ryoma has a long reach, but he is open to attack if he misses his target. Ryoma is weakest when picking up and throwing objects. He can beat an enemy with one stroke of his katana!"

"Officially, Ayame is a star artiste in a traveling troupe. Secretly, she is descended from a ninja family and is herself a ninja. Obeying her master's order, she is on a quest to acquire the Power Stones. Ayame's attacking power is frail and she is weak when throwing heavy objects. To compensate, she runs more quickly than any other fighter. During a power change, her attacks are very powerful. Her best strategy is to avoid attacks while collecting Power Stones."

"This miner from Dawnbolts has nerves of solid steel and never gets upset. He is journeying from mine to mine to dig the legandary Power Stones. In fighting, he relies on his unrivaled strength. Gunrock is a power fighter with a huge body. Though he is slow, his power outweighs the weak-ness. Thanks to his magnificent strenght, he is better at throwing objects than any other warrior."

"Jack makes no distinction between good and bad. His pleasure are simple - he likes anything shiny, and he loves to cut with his knife. In Manches, his hometown, he used to rob strangers of their jewelry. One day, he overheard a tale about Power Stones, the most glittering jewels of all. His new hunt has only just begun. Unpredictable and mysterious rapid moves are Jack's strenghth. However, his attacking power is weak. Confuse opponents with tricky moves!"

"Galuda lives in the weatern wilds. He is a shaman with a tender heart and hatchet-sharp intelligence. To save his village from a mysterious disease, he is on a worldwide search for Power Stones. Though he is a pacifist who abhors fighting, Galuda has sworn revenge on the "one-handed man" who brought sickness to his people. Galuda's offensive and defensive abilities are high. He doesn't have any notable weaknesses, and aim for powerful throw moves!"

All characters have a strong attack, weak attack, and a throw. As you could probably guess, a strong attack is more powerful than the weak attack, but is slower. The weak is the other way around with more speed, but lacks the power of the strong attack. You can string together the weak and strong attacks to perform combos. Every character has combos that are mostly unique to them, but you'll have to experiment to find them out (or find a handy faq somewhere). Throws are very powerful because the only thing that can block a throw is a throw. This them very useful for blocking the characters' "super moves" (pretty sure that's not the official term), because once a character initiates a super move they are vulnerable and can't do anything until the move is complete. This may sound like a big opening, but it is actually a very small opportunity. My point is: throws are very useful.

The characters of Power Stone can use the bare environment to attack their opponents. A basic ability for all characters is the wall jump. Although the wall jump is useful, Instead of jumping off the wall when a character is up against the wall one can press the attack button and their character will launch off the wall and attack towards their enemy, this applies whenever the character is in the air or on the ground. The other part of the environment that is usable is the ceilings. You can jump up towards a ceiling and hang on to it and climb around. While hanging on the ceiling you can press the attack button and your character will launch downwards and in the general direction of the enemy, but the distance you can move with this attack is limited so it is best suited to nearby enemies.

Objects are the items that are already within the environment such as chairs and tables. There are two ways to interact with the objects that are in the area. They can either pick them up and throw them or just push them towards an opponent. Light objects can be interacted with by any character, but only a few characters can interact with the heavy objects normally. If any of these excluded characters wish to interact with a heavy object they must first collect three power stones and transform. Poles are a unique item. Poles are heavy objects that can only be swung around in a circle once when picked up, but players who can't pick them up can swing around them and then propel themselves towards the enemy to attack. Also, and character can jump and grab onto the pole which is useful for avoiding attacks. Also, when hanging on to a pole you can press the attack button and your character will launch towards his nemesis and attack.

Items are the things that lie around the environment and can be used for things other than throwing it at your opponent. These items vary from guns, swords, a shield, a pole that very similar to Goku's power pole, a flamethrower, bombs, and even food to restore your health. You start out with only so many items, but as you complete the story mode with different characters you can unlock many more. To use an item you simply press the button you use to pick up all things and then press an attack button to use it.

Although in the story there is only one power stone in combat there are normally three (you can change it up to five). When the fight starts there will be two stones on the ground somewhere to collect and after a minute or so a third will appear. Whoever can collect all three (even if there are five you still only have to collect three) will transform. When you transform you attack, defense, and sometimes your speed will increase greatly and where the HUD shows your power stones will be a meter. The meter will go down with time and whenever you use an attack, so you overuse this powerful form. Your weak and strong attacks will change to either ranged attacks or melee attacks with a really long range. You also have two "super moves" (again pretty sure that's not official terminology) which can be activated by either squeezing the L or R trigger. Of course, each trigger does a different attack. These "super moves" will completely deplete the meter mention earlier so once it's over you will return to your normal self and the power stones will scatter.

"Sometime in the nineteenth century, superstitions and powerful legends run rampant. Located somewhere in the world are magic stones that can make any wish come true. These are the Power Stones!" - Narrator

As with most fighting games the story doesn't exactly take center stage. The story centers around all of the characters trying to retrieve the power stone. Some do it for fortune, some for training, other for pride. The story comes to a conclusion when your character has to fight Valgas and he absorbs the power stone and becomes a monster called "Final Valgas" in the game. After defeating him you'll see a small comic book looking cutscene that will show the character's motive and what they actually do with it. 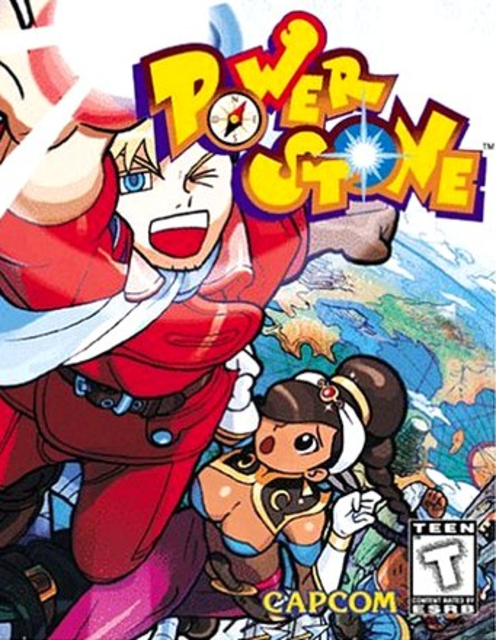