Brütal Legend is a humorous heavy-metal, open-world, action-adventure game with light real-time strategy elements. As Eddie Riggs, lead the people of the Brütal World to rise up against the Tainted Coil demons who rule the world, and their leader, the sinister Emperor Doviculus.

The player directly controls Eddie Riggs, a modern-day rock band roadie who is transported to another world by the power of his demonic belt buckle. The player fights using Eddie's battle-axe, the Separator, and guitar, which is able to magically call forth lighting, pyrotechnics, and other special abilities. Both the axe and guitar can be upgraded with special attributes as the game progresses.

Eddie also has a drop-top coupe named the Deuce (a.k.a Druid Plow) that he can use to travel the world (and run down enemies). The Druid Plow can be upgraded over the course of the game.

As single-player progresses, Eddie builds an increasingly large repertoire of unit types for his army, which he names "Ironheade". Eddie can command these units during missions and "stage battles."

Stage battles are large-scale fights with light RTS elements, in which the player must harness the power of loyal Fans to create units and attack the enemy's Stage base. The RTS mechanics are intentionally simplified to encourage hands-on fighting, as opposed to sitting back and watching one's troops follow orders. Eddie can also utilize various magical Guitar Solos which have various effects. These Solos are learned by finding "Tab Slabs" in the open world. The solos include setting up rally flags for your troops and summoning your vehicle for all factions. Each faction also features signature Solos which only they have access to; for example, the Ironheade faction get the "Facemelter" Solo, which literally melts the faces off of nearby enemy infantry, and the "Bring it on Home" Solo which summons a flaming zeppelin to crash into the battleground, dealing massive damage to enemy units (a reference to one of Led Zeppelin's album covers, which depicted the crashing Hindenburg).

Multiplayer consists solely of stage battles, both 1-on-1 and 2-on-2 battles, with the players selecting from one of the three factions; the heavy metal Ironheade faction, the goth rock Drowning Doom faction, and the "industrial bondage" Tainted Coil faction. The glam rock Hair Metal Militia figure into the story, but are not playable. Fortunately, they are merely a reskin of Ironheade, representing the superficiality of the differences between glam rock and "real" heavy metal.

The first downloadable content was made available November 3rd, 2009 on PSN, and November 5th on Xbox Live. it was called "Tears of the Hextadon", and cost $5. Downloadable content "Hammer of Infinite Fate" arrived on December 17th, 2009. It was released for $4.99 on the PSN and 400 MS Points on Live Marketplace. Both were just map packs, and therefore didn't matter, although The Hammer of Infinite Fate also came with alternate skins for several characters, including a newly-bearded Eddie.

The game tells the story of a roadie named Eddie Riggs who, while working for a faux heavy metal band called Kabbage Boy, is crushed by a collapsing set, causing his blood to fall onto his enchanted belt buckle. The blood awakens the demonic spirit within, transporting him to a strange world of Rock, where half-boar, half-motorcycle creatures roam the land, head-banging warriors smash their faces into foes, and forests of chrome exhaust pipes are the norm. There he meets the beautiful Ophelia, and siblings Lars and Lita Halford, and together they form a resistance movement against the corrupt demon tyrant Emperor Doviculus, and his glam-metal lackey, General Lionwhyte.

Throughout the game, there are guitar solos that Eddie can learn to play to unleash magical effects. Most of them are hidden throughout the world, while others are learned as part of the story.

Relic Raiser: When played in a patch of devil thorns, Eddie is able to summon buried relics from the ground, including motor forges, musical tracks, gateways, and other hidden items.

Anvil of Burden: During stage battles, Eddie is able to play this solo to temporarily chain an anvil to the enemy leader's ankle, preventing them from running or flying.

Face Melter: A lick so righteous that it will literally melt the faces off of any enemy who cannot appreciate its.

Bring it on Home: Eddie drops a zeppelin made of molten lead on the battlefield to crush many enemies. Even powerful enemy units and vehicles are no match for this crash landing.

Battle Cry: A powerful tune that inspires nearby allies to deal more damage and heal slightly.

Rock Block: When used during stage battles, this solo barricades the enemy's stage and prevents them from summoning new troops.

Call of the Wild: Music that soothes the wild beasts. When used, Eddie is able to summon whatever animal he previously hunted during the Overslaughter sidequests.

Light of Dawn: When played, this inspiring solo removes any debuffs to allies and removes buffs to enemies.

Summon Flag: Plants a rally flag in the spot where Eddie plays this solo during stage battles.

Fan Tribute: When played for fans, they will fly to Eddie's stage during stage battles to help him gather more troops for battle.

There are four factions in the game, three of which are playable factions in multiplayer.

On July 28th, 2008 Activision Blizzard released a statement that suggested the only Sierra games they would be publishing would include Prototype, Crash Bandicoot, Spyro the Dragon, Ice Age and one unannounced title. The statement said all other projects were being reviewed. On July 29th, Tim Schafer updated the "Double Fine Action News" blog stating " Brütal Legend is fine." Schafer had mentioned previously that they would be showing more of the game off after E3 2008. Variety had reported that the game will not come from a traditional publisher and there is a "unique arrangement" for the game.

On December 12th, 2008 Double Fine and EA announced a publishing deal that would see the game released on October 13th, 2009.

On June 4th, 2009, Yahoo! reported that Activision was filing a lawsuit against Double Fine, stating that they had invested $15 million dollars in the game and that they still had a valid contract to release it, despite Double Fine switching their publisher to Electronic Arts. Tim Schafer responded in his usual facetious tone by saying that Activision should have "put a ring on it", referencing a song by Beyonce Knowles.

A countersuit was filed by Double Fine citing that the suit was malicious, done in an attempt to sink a competitor's product during a critical production phase.

Before the scheduled August 6th, 2009 ruling a settlement was reached between Activision and Electronic Arts and Double Fine. Activision received reportedly minimal compensation in the agreement according to the L.A. Times, though the exact amount was not disclosed. It is suggested in the linked article that Activision ended the suit in this matter to avoid losing the case.

At the UK Download Festival 440 fans broke the Guinness World Record for “Most People Playing Air Guitar At One Time” to the tune of Motorhead’s “Ace of Spades" at the EA booth in order to promote Brütal Legend. The previous world record was 318 people set in 2008.

Brütal Legend was the main game showed off at Spike TV's Video Game Awards 2008, where a trailer was shown of the game.

There were also a number of viral marketing videos featuring Jack Black in a muscle suit pretending to have gotten so into the role of Eddie Riggs that he gained an absurd amount of muscle mass and became tougher. In some cases Tim Schafer accompanied him to play along.

Brütal Legend has a content filter, similar to the one in Gears of War 2. Players have the option of censoring offensive language and gore. The options will show up on screen in the first scene of the game, but can also be changed at any time via the in-game pause menu. Censoring language simply results in bleeping over obscenities, while the gore censor removes blood and slightly alters some cutscenes (for example: with the filter off characters may be decapitated, while the censor being on leaves them securely headed).

Retailers offered two different pre-order bonuses for Brütal Legend, Gamestop & Gamestation (a UK gaming store) pre-orders rewarded customers a Tenacious D in-game guitar, replacing Eddie Riggs' guitar in multiplayer, and being selectable as a free guitar upgrade in single player, though only a superficial one. Best-Buy pre-orders came with special packaging of the game in a vinyl sleeve similar to the one seen in the main menu of the game.

In addition, a Brütal Legend t-shirt was given to the first 666 people who pre-ordered the game through GameStop back when the title was being published by Sierra.

Tim Schafer announced Brütal Legend's official soundtrack via a viral video. In the video he solves a Rubik's cube while Emily Ridgeway, the game's Musical Director, reads the list of every band and song in the game, accidentally skipping two in the process. Schafer finished the Rubik's cube just in time.

The following is an incomplete listing of the soundtrack:

The original soundtrack was composed by McConnell and was released on October 30th, 2009. This also includes "Girlfriend" by the fictitious in-game band "Kabbage Boy."

Installing Brütal Legend on the hard drive takes up 5.9 GB of space.

The PS3 version of the game shipped with two major bugs: a data corruption issue that had a chance to delete saves after a certain point (near full completion of the main story), and sound so severely compressed that everything was muffled, including the voice acting and robust soundtrack touted by the developers as major features. Both problems were solved after a 1.01 version update, but a 1.02 update sent before a piece of DLC somehow marked a return of both problems.

A solution available is to cancel the patch download after the first is at 100%, therefore meaning 1.01 is finished and 1.02 is made invalid. However, since some DLC for the game requires updating, the extra content may not work without the buggy 1.02 version installed, and online multiplayer is entirely impossible. The single-player game is fully functional with the 1.01 manipulation. 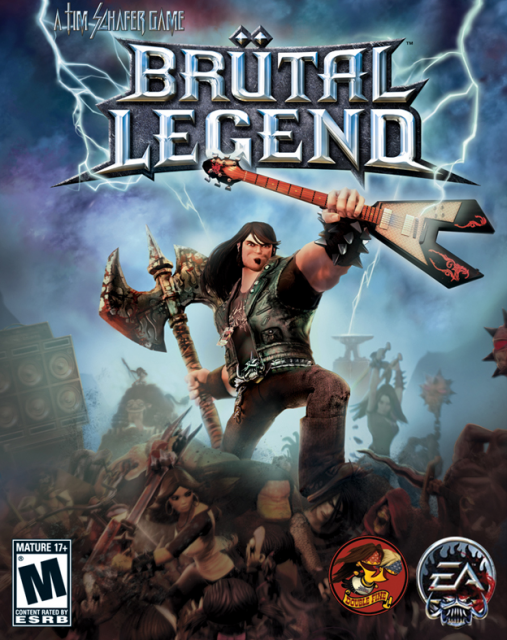