Developed by Gas Powered Games for the PC, Demigod is a real-time strategy, action role-playing game hybrid. The game draws heavily from Defense of the Ancients, the custom map scenario for Warcraft III: Reign of Chaos

Demigod is an RTS/RPG hybrid inspired by the Warcraft III mod, Defense of the Ancients. Developed by Gas Powered Games, creators of Supreme Commander and Dungeon Siege, the player takes the role of a demigod fighting for a position in the pantheon of gods. The single-player campaign consists of a tournament-style ladder on the path to godhood. Multiplayer pits teams of players against each other with the goal to defeat opposing armies and destroy the enemy stronghold. Built on the Supreme Commander engine, Demigod features a grand sense of scale with 300 feet tall demigods and colossal giants laying waste to hundreds of soldiers.

Players take part in a tournament style gameplay design, similar to that of fighting games, or racing games such as mario kart. Players choose a demi-god and then progress through a series of matches until ultimately success is achieved. This can take between 1 and 5 hours depending on the difficulty setting the player has chosen, which range from easy to nightmare. The single player component shows the story of 8 demigods having it out in order to determine which of the 8 will take the 9th and final throne amongst the other gods up top.

Once a player has entered a multiplayer game for the first time, he/she will allign herself/himself with a particular demigod of the 8 and enter in matches against other players online. There is also an element of character progression as the player gains experience through matches, this experience will carry over to other matches and players can earn items that allow them to customize their Demi-god. Multiplayer matches take between 15-60 minutes depending on the skill balance of the players

Near the end of the 87th migration, when the minions of Hel-Gorgath were in rebellion and the balance between light and dark was under threat, the Ancients convened a Gathering. The Gathering found that one of their own, the so-called God of the Progenitor, had intervened by sharing Names and Ways with his underlings and allies on the other side of the Veil.

In punishment, the Ancients cast down The Progenitor from the Deep Places and all of the beings in his ken were laid low and utterly destroyed.

The Ancients, known as Gods to mortals, therefore sought a successor. It was known that the Progenitor had many offspring, begat by mortal consorts, who retained sufficient divinity to stand for Induction. But, not all agreed, for some were offended by the obscene co-mingling of Essences, crude flesh, and the rank perversity of the Progenitor�s dalliances. For this reason, a game was proposed for the offspring to prove themselves worthy.

So it was made to be that messengers were sent to the Dark and Light Places to summon the pretenders to Rokkur. There, they would throw down their brothers and sisters in the arenas to win the favor of the Ancients and ascend to their ranks.

Demigod was released with 8 different Demigods (later expanded to include two new ones) which are split into two distinct classes. First is the "Assassin" class. These are powerful combat units who are able to lay waste to large numbers of enemy units very quickly and take massive amounts of damage. The second class of Demigod is the "General". They all have the ability to summon units and cast spells increasing their allies effectiveness. Although, they are generally much weaker than the Assassins they can still hold their own in combat.

The rook in an ambulatory castle whose main function is as a living siege weapon. He has a few area of effect spells but they are slow to pull off and really only situationally useful. He comes into his own around mid game when he can acquire an archers tower on one shoulder and a light (or dark depending on your faction) tower on the other that fire at nearby enemies independently. His main function is tearing down enemy fortifications which (with the right skills) he can due while also reneging health. His other big power is the ability to pull defensive light towers from the ground anywhere he chooses. A great deal of practice is needed to use the Rook effectively since he;s very slow and requires a lot of planning to avoid getting massed and destroyed

The TB is basically two characters in one. He has two skill trees unlike the other characters, one for ice spells and the other for fire. He can switch between these two skill sets on the fly, with ice containing crowd control effects and fire containing mostly direct damage spells, both single target and area of effect. The torch Bearer can be useful in all areas of the game since his early AoE attack allows him to kill large mobs of creeps quickly while his fireball spell does decent single target damage. As the game progresses and these spells become more powerful the TB becomes even more of a threat. With the right equipment and some careful play he can be a character to be feared beginning to end..

The UCB is a feral diseased creature that was called into existence by a greedy merchant. It can quickly close the gap to reach its foes before infecting them with its vile and contagious plague. It's basic function is to close the gap with its enemies and lay waste with both it's basic attacks and it's damage over time plague effects. It's best dealt with at a distance.

A member of the angelic race of the Thelara. Unlike his kin, Regulus has a keen interest in technology even going as far as to create his own armor and crossbow. On the battlefield he uses his crossbow to great effect, sniping at Demigods from a great distance. Up close hes vulnerable but at range he becomes an outstanding single target damage dealer. In particular his snipe ability improves in damage the farther from the target he is. His main function is therefore to stay at max distance and snipe at enemy demigods.

The newest addition to the assassins pantheon, the DA is all about speed and direct damage. His abilities allow him to switch positions with opponents as well as closing the distance with speed. His main use is to dash in deal damage and escape before the opponent has the opportunity to attack back.

On April 9th, video game retailer Gamestop released Demigod, a full 5 days before the games official release date. In response to this Stardock employees were called into work during the Easter weekend to configure the multiplayer servers and Demigod was released to Stardock's Impulse service for anybody who had pre-ordered the title.

The early release of Demigod caused a number of issues. Firstly, the game appeared on a number of torrent sites and was downloaded by tens of thousands of people. Secondly the unexpectedly high number of connections to the game's multiplayer servers overloaded them causing connection problems for those who everyone who tried to connect. In a post on Demigod's official forums Stardock revealed that the connection problems were due to huge numbers of illegitimate connections from pirated copies of the game, out of the 120,000 connections they received only 18.000 were from purchased copies of the game. This number is especially tragic due to Stardock's very public policy of not putting DRM on their games, the company has a firm belief that allowing pirates to control how a game is made is a major failing. As of the 21st of April 2009 Demigod's connection problems appear to have been resolved. 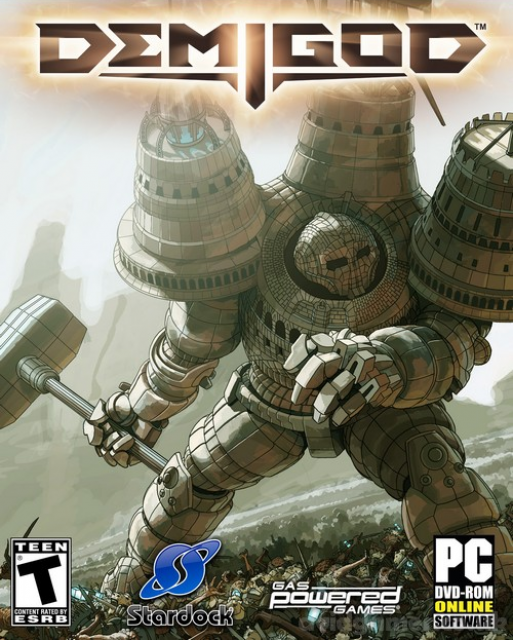