Dungeon Explorer: Warriors of Ancient Arts is an action-rpg for both the DS and PSP. Both games feature radically different graphics, gameplay, themes, and difficutly. This is not a remake of the TurboGrafx-16 original (or its sequel), but a new story set in the distant past.
PlayStation Portable Nintendo DS PlayStation Network (PSP)

Choose from one of nine pre-designed characters from three races, with three classes each.  Your task is to strengthen your character until you are able to conquer the mighty pyramid at the foot of your town, defeating the monster known as Breed.  You can enter the pyramid at any point in the game, from either the normal or hard difficulty, and test your mettle against its unique challenges.  The pyramid has its own difficulty setting, which is on par, or slightly harder than, the normal difficulty mode.  Game completion time, for both difficulties, the pyramid, and stat maxing, is around 50 hours per character.

Create your character from one of three races, choice of gender, and more than six classes (others open up later in the game).  In this game, which takes place a thousand years prior to the events depicted in the DS version, your task is to explore and close a massive rift that is containing a host of powerful monsters.  Much time will be spent overcoming the difficulties and frustrations of eight themed dungeons, each containing 23 levels, each with a set number of floors, culminating in the 23rd level, which has 99 floors.  For those looking for a 500 hour game, here's your opportunity.

The DS version plays very much like Diablo, with players having simultaneous access to a unique set of melee and ranged attacks, while playing from a isometric perspective.  All combat and spell usage is done through the d-pad and hotkeys, as the stylus is not used in this game.  When selecting a character, each one has a set of base abilities unique to that character.  Additionally, after completing the first quest, players can choose a group of secondary skills from the school of arts.  Each set of skills level up differently, and the game makes it possible for your character to learn all the secondary skills in the game, if desired.  The item drop system also shares some elements with Diablo, as players are able to find normal, magical, unique, and set equipment.  Set equipment is the crux of the DS version, as they can greatly enhance the performance of your character.  Other noteworthy features of the DS version include the ability to play online with up to two other players.  Players also have access to a helper robot (known either as an Owon or Sordin), which can be used to either attack enemies or defend/support your character.  The game's flow is very much like a standard action RPG, taking players from location to location, fighting bosses and moving on to side areas or advancing the story.

The PSP version plays similar to Champions of Norrath/ Baldur's Gate on the PS2.  Players can choose between either melee or ranged attacks, and several class specific skills, while playing from a top-down perspective.  Combat and item usage makes use of all of the PSP's buttons, in addition to toggle keys.  Unlike the DS version, your character can change classes, learn new ones, and learn new magic and weapon skills.  Weapon proficiencies and classes are letter ranked, capping off at an S-grade, and you learn new skills (both weapon and class) through simply playing the game.  Each attack (whether magic or melee) adds points to an invisible counter, just like in the DS version, and once it reaches a certain level, your grade will be increased.  The item system for the PSP version is drastically different from the DS version, as enemies drop different grades of equipment, and it's up to the player to customize them.  Items are used to imbue stats randomly onto equipment, and each piece of equipment can only be modified a set number of times.  Lots of saving and reloading is necessary to maximize stat gains.  Another difference from the DS version, is that the PSP version allows you to have up to three party members in the single player mode, and up to two additional players in the ad hoc mode.  Unfortunately, unlike the DS version, players do not gain experience in multiplayer, only better items.  Additionally, the game flow takes a different path than the DS version.  Players will traverse different themed sections of a massive dungeon in the rift, completing guild quests until a story advancing one becomes available.  During your travels, you will be seeking gems that will allow you to open up doors allowing you deeper into each of the eight massive dungeons, and to grant you access to more quests.
Children of Mana From the Abyss Soma Bringer Legacy of Ys: Books I & II Ragnarok DS Final Fantasy Crystal Chronicles: Ring of Fates Final Fantasy Crystal Chronicles: Echoes of Time Untold Legends: The Warrior's Code Untold Legends: Brotherhood of the Blade Ys SEVEN Ys I & II Chronicles Ys: The Oath in Felghana Dungeon Siege: Throne of Agony Ys: The Ark of Napishtim .hack//Link Monster Hunter Freedom Unite Monster Hunter Freedom 2 Monster Hunter Freedom Silverfall Monster Hunter Portable 3rd Shining Soul Shining Soul II 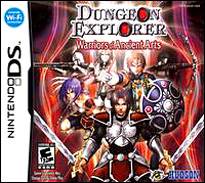