Long Journey of a Sistanian Prince in Plain and Wilderness to Discover his Heritage and Family.

Orient: A Hero's Heritage or Era of Pᴂhlavians (عصرِ پهلوانان) Is the First Video Game developed by "Resaneh Narmafzar-e Sharif" software development company and simultaneously the first Iranian Computer-Role Playing game.
This game indicates the essential of this country for video game Business, because comparing to contemporary domestic Iranian games, it's a huge success, even with observing the Gameplay and Graphical flaws and shallows.

Story begins in Zabol, currently located in Sistan, Sistan in Persian mythology, according to Shahnameh, is land witch Rostam was born and permanently lived in it.
Being a huge and populus, cultivated city, Zabol's palace was the sanctuary of many inhabital and successful kings. in this game, Pishdad, with companionship of his son, Atar, live their life on Zabol's palace. one day, during a hunting game in nearby counties, Demons of Ahriman, attack Zabol, and traumatize the people. Pishdad and Atar, reluctantly leave for the city, and when they arrive, they see a glimpse of city ruined, and Atar sees himself challenged to take out the Ahrimanian forces and bing peace back to Zabol.

There are various locations in this game, and like many other role-playing games, there are races of creatures wandering around them as well. Both locations and concepts will be described bellow.

Zabol, as mentioned above. Greenland, a peaceful group of fields and hedges. Mountainlands, a criused land surrounded between time and place and abandoned by the humanity, Dwarfcaves, a cave filled by small and odd dwarf who transcend human's phrasology and communication, Snakeshoulderlands, land of terror, blood and fear.

There are 9 main characters in the game, except Atar:

Orient: A Hero's Heritage inherits its gameplay elements from most of CRPGs. Camera is controlable, like Fable, we can choose its distance from the character by M-Mouse button. Atar earns EXPs after defeating enemies, and levels increses automatically as described bellow:


After the main bar, "Overall EXP" increases, "Level", increasing one point after "Overall EXP' has been increased by 10 points. then, "Usage" and "Farre-Izadi" are the main elements of combat, then, subsections like Dexteritym Health, Weapon, etc, will be upgraded. 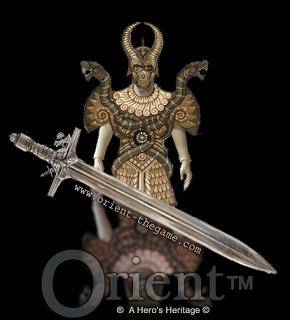