A remake of the beloved classic, Lunar Silver Star-- Lunar tells a story filled with love, betrayal, and redemption. This remake includes updated visuals, an updated interface, remastered music, remastered cut-scenes, and new cut-scenes to fill in story gaps. Hailed by critics as one of the greatest RPGs of all time, Lunar masterfully crafts an engrossing story, cinematics, and cut-scenes to create an experience to be had by all.

A Demo is available on the PSN Network. If you import a completed demo save to the final game you will receive a special bonus item. At the beginning of the game Luna recieves a slingshot from Alex's dad, but if you import the completed demo save Luna will instead receive Silver Darts that everyone can use. This will give you a great advantage to start out with as the Silver Darts inflict extra damage to the enemy. You can acquire this weapon later on in the game, if you decide not to play the demo first, by paying 26,000 silver.

The game is available both digitally via the PSN Network, and as a stand alone retail game. The retail version is a Limited Edition including the following bonus items: a soundtrack CD and a set of 13 exclusive "bromide" collector cards highlighting the girls of Lunar

Silver Star Harmony (SSH) is a remake based heavily on the second version of Lunar: The Silver Star, known as Lunar: Silver Star Story Complete (SSSC). SSSC introduced re-composed music, re-drawn animated cutscenes, updated dialogue, and a streamlined overworld map without random battles. SSH's touch-ups are based on these updates, as opposed to the original.

SSH does not re-compose the music a third time, but rather remasters it, partially with real (or close-to-real) instruments. (The lead violin melody in the town of Burg serves as a prime example.) The written dialogue, however, is updated once again, though not as drastically or noticeably as it was the first time around.

The overworld map resembles the more streamlined version found in SSSC, but is streamlined even further to omit direct player movement. The map itself is, in general, a more zoomed out view, and players need only use the d-pad to point to preset locations for travel instead of guiding the party directly.

Graphically, character sprites are larger and more defined; they are no longer restricted to the size of a single tile. In fact, the map renderings in general do not appear to use the tile-based stylings of either SSSC or the original. The view is rendered instead in what appears to be a mixture of free-drawn scenery combined with isometric structure, making for a more expansive experience.

In addition, during written dialogue, the text boxes have an updated font and feature much larger character portrait art that isn't confined to the boxes themselves but are rather layered behind the box. Character art takes up nearly the entire height of the screen.

Mechanically, SSH has gotten rid of the "per-character item bag" restrictions of the previous versions; all items are shared in a large bag by the entire party, similar to most Final Fantasy entries. The battle HUD is also streamlined to emphasize the art and characters more than the menus, with graphical icons representing the various commands at your disposal. A special meter is also visible underneath each party member's data, filling up as you partake in battle, and signalling the availability of powerful special attacks when it's filled completely.

The beginning of the game features a new prologue, which lets the player control the party of The Four Heroes through the climactic battle that serves as the backstory to the game. 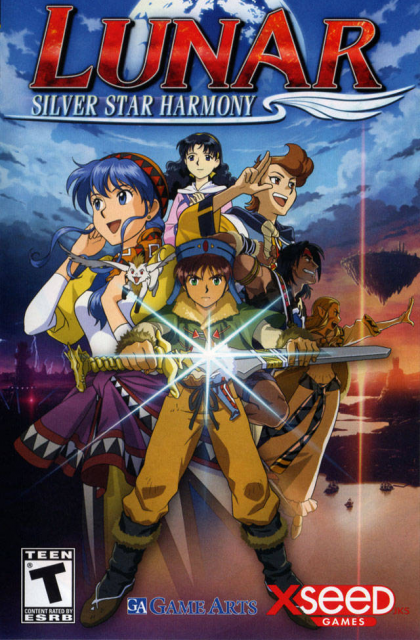