Continuing the story of the first Two Worlds, the game sees the return of the player character from the first game still trapped in prison, slowly having the life energy sucked out of him by Lord Gandohar which he uses to keep the players sister Kyra imprisoned while he continues his experiments on her.

Shortly afterwards the player character is broken out out prison by the orcs and since having the life drained out of him, has lost all of his powers. The rest of the games story is comprised of regaining his lost powers and continuing his battle against Gandohar.

Taking place in the same territory as the original, the kingdom of Antaloor has undergone some changes since it was last seen. Boasting over 60 square kilometers of open world area to explore, Two Worlds II's world consists of two large islands and a number of smaller ones that players can travel to by sail boat or by teleport.

These island can range from vast, open savannas populated by cheetahs, rhinos and warthogs to dense jungles all of which can be explored by the player.

The Combat of Two Worlds II is greatly improved over its predecessor adding 4 attacks and multiple special moves for each weapon in the game. There is also crafting which can be used by placing stones into various pieces of equipment. Also new to the game is pick pocketing which can range from simply picking someone's pocket to full-on store robberies.

Your also able to fully customize your equipment (colors, symbols etc.), however, this requires a special profession. The player even has the ability to start his own small factories where you can hire certain Non Player Characters to work and make items for you. Paying them more than average helps them make better items while paying them less than average will decrease the quality of the items.

Much of the gameplay revolves around dungeon exploration with mainly standard fetch quests. Like similar open world RPGs, it is easy to wander into areas for which the player character is under-leveled. 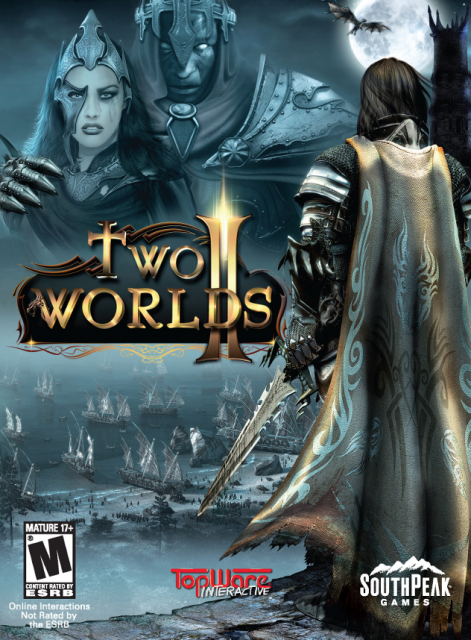