The sequel to Level 5's PS3 exclusive, White Knight Chronicles. It was released in Japan in 2010, and in America in September 2011.
PlayStation 3

Like the first game, WKCII allows the player to create a custom avatar which will inhabit the world alongside the named characters. If a save file from the first game is present, it also allows players to import their character from the prequel, including all of their money, equipment, and guild rankings. Again, as in the original, this character will be used most prominently in the game's online play, dubbed Georama, and will serve little purpose in the single player campaign.

The story of WKCII picks up directly after the events of the first game, in which Princess Cisna was kidnapped by malevolent forces intent on (what else?) world domination and had to be rescued by Leonard, a humble barkeep with dormant mystical powers. Leonard and Cisna return in the sequel, along with many other cast members from the first game and a few new faces. The full cast of characters is as follows:

Astute readers will note that most of the characters above were present in the first game as well, and indeed one of the biggest complaints leveled against WKCII's campaign is its similarity to that first game. The progression of dungeons in WKCII is merely the progression of dungeons in the original White Knight Chronicles, but in reverse. Again, similarly to the first game, the story never advances much beyond a simple "rescue the damsels in distress and save the world from the Magi" premise.

While the plot may seem very similar, numerous improvements were made to the gameplay since the first game was released. Combat still plays out similarly to an MMO, with cooldown meters governing attacks and combos, but those cooldowns have been significantly shortened, so that attacks can be made in a faster, more fluid manner. Additionally, character weight plays a larger role here than it has before. Characters carrying heavier weapons, such as axes, may take longer for their attacks to cooldown, and may dodge slower than characters with lighter weapons.

Georama is the name that White Knight Chronicles uses to refer to its online mode. Those MMO parallels prominent in the combat really come into their own in Georama, which allows multiple players to band together in instanced worlds, and set out on quests to slay monsters and find treasure. Players will also build their own cities as they progress and get more money, similar to how the mechanic worked in the earlier Level 5 release, Dark Cloud. While players could only group together in packs of 4 or less in the first game, this sequel allows for up to 6 players to join in on a quest. The player-created avatar comes into its own in this mode, as none of the main characters from the campaign are playable in Georama.

Shutting Down the Servers 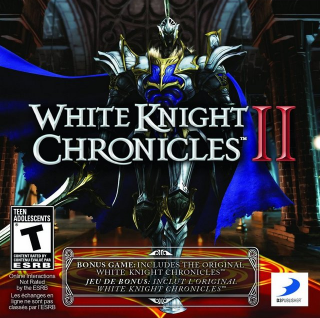