2 Spicy (or Too Spicy) is a light-gun shooter arcade game developed by Sega. It uses a unique foot controller in addition to a standard light gun. It has both a two-player multiplayer and a story mode with cinematics.

Along with standard light-gun shooter elements found in games like Virtua Cop and Time Crisis, 2 Spicy features other concepts that are usually found in other types of games, mainly third-person shooters. The most apparent is the ability to move between specified cover using two foot pedals located below the bulk of the cabinet (an evolution of the foot pedals which move in and out of cover in Time Crisis). The cover also degrades when it is shot; eventually it will break and inflict damage on the player using it. When a player follows the opponent with the cursor long enough it will zoom in and cause your shots to inflict more damage.

2 Spicy has eight playable Characters, two of which can only be used in versus mode by entering a code you get after defeating them in the main game. Each character has their own unique weapon.

2 spicy features both a standard Co-Op mode where two players work together playing through the games stages and a versus mode where both players duel each other in a deathmach style mode that keeps track of your wins in a method similar to a fighting game.

The game runs on the Sega Lindbergh arcade system, the specifications of which are as follows: 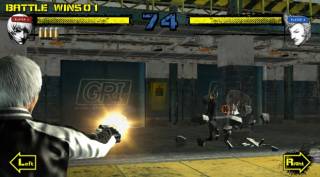