Two mercenaries, E'lara and Caddoc, go in search of an artifact that Caddoc had a vision about that could save humanity or threaten its survival.
Xbox 360 PlayStation 3

Hunted: The Demon's Forge is a third-person perspective action-RPG with a cover system developed by inXile Entertainment and published by Bethesda Softworks. The developers say the game is meant to be an homage to the "good-old dungeon crawlers", but of course, re-imagined to the 21st century.

Hunted: The Demon's Forge is set in a dark fantasy world where the dark ages have become corrupted. Heinous creatures have emerged from the underground and begin abducting the townsfolk. With the promise of money, two mercenaries named E'lara and Caddoc embark on a mission to discover where the townsfolk have been taken. Their journey will take them down a dark and twisted path filled with death, slavery and sacrifice. Travel deep within the world of Kala Moor and to the secrets of The Demon's Forge.

Hunted: The Demon's Forge first entered development in 2008 headed by Brian Fargo, formerly of Interplay fame and creator of the Fallout series. Fargo went to Bethesda Softworks for a publishing deal and Bethesda gladly accepted. Early stages of the game have dubbed it "Gears of Warcraft" and "Spears of Gore" due to its co-op and fantasy setting and genre.

Hunted: The Demon's Forge's combat is based around your typical "dungeon crawler" combat system, featuring swords, bows, magic and other staples to the fantasy genre. Players can control either E'lara or Caddoc, with E'lara playing a role based around range and Caddoc wielding large melee weapons. InXile will also be pushing towards a more action approach to the game. They have said that they want "Sci-Fi and World War II like action in their game", whatever that means. The game utilizes a third-person perspective with a cover system similar to many current shooters. A currency system consisting of crystals that players can use to both purchase new moves, as well as upgrading existing ones.

The game is focused on co-op play with common features such as being able to revive your partner even if you are not directly next to them and using skills which buff the duo's abilities. Players can also Battle Charge their companions by casting a spell, in order to boost their attack damage. Puzzle solving will also be incorporated into dungeons, often forcing the players to work together doing different tasks to move past an obstacle or acquire loot.

Also includes an very simple map editor called the "Crucible" which grants you the chance to create your own dungeons up to 25 levels deep. The gold you collect from single and multiplayer earns rewards which are spent in unlocking new weapon sets and monsters to populate your dungeon. All creations can be stored on the Hunted servers for later download by other players.

The characters themselves use different tactics and the AI in the game will vary depending on how the characters are played. For example, when E'lara is fighting, she may be rushed by melee attackers and will require Caddoc's help to fend them off so she can get to higher ground. Similarly, Caddoc may be pinned down by archers and will require E'lara's help. In terms of the story, the general clichés of these types of characters will be switched. For example, the player might expect Caddoc, being the big tough guy, to be much more belligerent and want to fight more often when in fact that character role is filled by E'lara. The same can be said in that Caddoc is a little bit too cautious in his dialogue and such.

The original score for Hunted: the Demon's Forge was composed by Kevin Riepl. 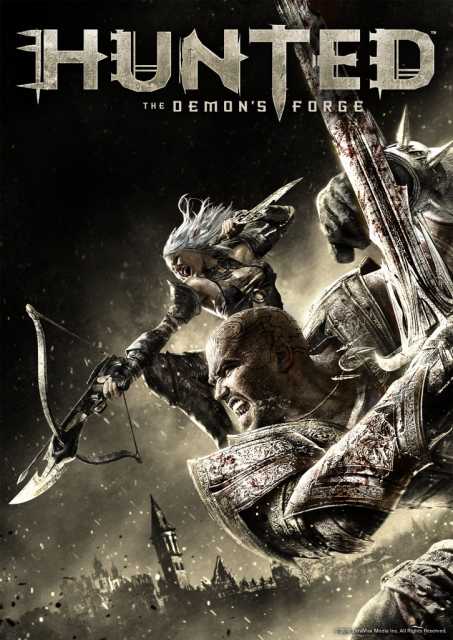