An action game by Valhalla Game Studios, headed by ex-Tecmo producer Tomonobu Itagaki. It was published by Nintendo as a Wii U exclusive.
Wii U

Devil's Third is a third-person action game, and the first game produced by former Ninja Gaiden and Dead or Alive lead Tomonobu Itagaki at his independent development house Valhalla Game Studios. THQ initially signed on as the game's publisher, but in 2012 was forced to drop the game from their slate as part of their financial recovery efforts. At E3 2014 it was revealed that Devil's Third is now a Wii U exclusive, published by Nintendo. The game was released on August 4, 2015, in Japan and August 28, 2015, in Europe with a North American release planned for December 11, 2015.

Devil's Third is a third-person action game that mixes shooting and melee combat. The speed of the player character's movement is based on the weapon currently held. The game will also feature a dismemberment system similar to that seen in Ninja Gaiden II. The player can freely switch between ranged and melee attacks, and weapons can be taken from defeated enemies. Players can also fight bare-handed.

The game will feature a variety of firearms and melee weapons. Guns will also be customizable, although it has not been specified if the options are simply for aesthetic purposes.

"True martial arts" have been described as being a distinctive feature of the game, a feature that may be complemented by Valhalla's experience with fighting games. Said to be another differing aspect of Devil's Third from other games, players will be able to precisely control their characters while jumping from a point of high elevation.

The game's protagonist is Ivan, a Russian-accented man whose body is adorned in tattoos of Sanskrit characters. The tattoos tell an old Japanese ghost story of a monk that had his entire body covered in similar tattoos as a means to ward off ghosts, but because his ears were not adorned, the ghosts tore them off.

The game's story is set in a world ravaged by conflict after Earth's entire power grid is destroyed by the Kessler Syndrome. The Kessler Syndrome is a theoretical event that, in summary, states that the density of objects in LEO (low Earth orbit) could become high enough that the collision of those objects could create a cascade, creating debris that would augment the chance of future collisions. In other words, when two objects such as satellites collide, the debris from these objects collide with other satellites, which in turn creates more debris, resulting in a chain reaction of destruction.

It has also been hinted that there will be three factions in the game.

Online play is an important aspect of the game. Modes that have been confirmed are "Standard Battles", "Survival" and "Team Battles" but there will also be more online gameplay options. Players will be given numerous customization options, both in terms of character aesthetics and equipment. The landscape can also be customized with a variety of structures.

There is no team chat available, to which Itagaki claims is due to lack of bandwidth.

A standalone, free-to-start version of the multiplayer component will be released for PC alongside the Wii U game. This version will be called Devil's Third Online.

Whence the game underwent previews from a number of European outlets, many of which lambasted the game for its gameplay, tone, and innumerable technical issues, Itagaki responded by claiming that such complaints were founded on the critics' lack of skill with the game. He also claimed that the Wii U's GamePad was ill fit for playing the game, and that they should instead use a Wii U Pro Controller alongside a USB keyboard (for text chat in multiplayer).

Previously, the story elements of Itagaki's games had been written by Hiraoki Matsui, head of the art department at Valhalla Game Studios, but this time there will also be several Hollywood script writers writing for the story in Devil's Third. Because of this, Itagaki has said that this is their biggest franchise and it won't just be in the form of a video game, but there will also be cross media developments.

The game's basic engine is internally made by the development team, but external tools are going to be used for some areas of the game. The game's A.I. system, for example, is made with the use of an externally developed engine.

On the June 11th, 2010, episode of Gametrailers TV, it was announced that Valhalla Game Studios will be working with THQ to create Devil's Third. They proceeded to show a trailer showing actual gameplay. However on June 12, 2012, Eurogamer announced that THQ will not publish the game and that all rights to the project have been returned to Itagaki and his company Valhalla Games.

"We were anguished and [THQ] were really kind to us," he said. "Mr. Danny Bilson was searching for a way to work together until the very end. I do appreciate him and THQ managers that signed the transfer contract." - Tomonobu Itagaki

News on the game's development went mostly silent following the split from THQ. However, on June 10, 2014, during E3, it was announced that Nintendo had signed on to publish the game, and that development shifted toward building it as a Wii U exclusive. While appearing on an IGN livestream at E3, Itagaki stated through a translator that Nintendo "really understood my vision, so I felt I really had to work with them."

The name "Devil's Third" has been said by Danny Bilson (former Executive Vice President at THQ) and Itagaki to be related to the game's setting and characters. The term derives from musical tradition, in which the perceived dissonance of three-note sequence called a tritone, or "Devil's interval", caused it to be avoided. 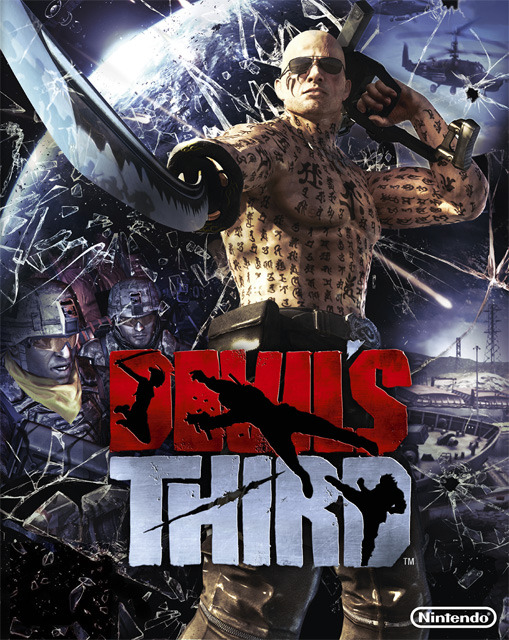