The sixth title in the Yakuza series, replacing the previous games' semi-realistic storyline with a 'what if' story about a zombie invasion, still starring Kazuma Kiryu and other major Yakuza characters.
PlayStation 3 PlayStation Network (PS3)

Yakuza: Dead Souls, originally released in Japan as Ryu ga Gotoku: Of the End, is a spin-off of Sega's Yakuza series, similar in nature to the title Ryu ga Gotoku Kenzan!. The game takes the characters and setting of the Yakuza series and puts them in the midst of a zombie apocalypse, with elements adapted to better fit the nature of the story and zombie-fighting gameplay. It was originally to be released in Japan on March 17, 2011, but was pushed back due to the earthquake and tsunami that devastated the country one week earlier. It was eventually released on June 9, 2011. A Western release was announced by Sega on October 4, 2011 with a date set for March 13, 2012. The western release will contain all of the DLC released in Japan on the disc.

Dead Souls is set in Japan in April of 2011. The story takes place in the standard location used in the previous Yakuza titles, the Kamurocho district, which is the fictional version of the real red light district Kabukicho, located in the Shinjuko ward in Tokyo. The area is in ruins due to an inexplicable zombie outbreak and a quarantine has been set up by the Japanese Defense Force. Previous Yakuza lead Kazuma Kiryu is left inside the quarantine fighting for his life. Ryuji Goda, Shun Akiyama, and Goro Majima, all from past Yakuza games, team up with Kazuma to defend against the zombie onslaught.

Game play for Yakuza: Dead Souls remains to be similar to the rest of the series. The player controls a character in a third person view while roaming the streets of Kamurocho.

There is a large assortment of restaurants, stores, and recreation to be found/liberated. Each character has fifth teen side missions accessible during the campaign or available after in the Premium Adventure mode. The most distinct feature in Yakuza: Dead Souls is the Quarantined zone where normal Kamurocho becomes infested with zombies and mutants. This varies from character to character, changing a few key locations.

The combat is a mixture of the series' classic hand to hand combat (against humans) and new third-person shooting action (against zombies). Recurring elements such as weapon crafting and upgrading as well as a wide selection of mini games.

The biggest departure for the series has been the jump from full hand to hand combat with light weapon use, to a complete evolution into gun play. Although not carrying the western evolution of third person shooting controls, Yakuza; Dead Souls does have interesting compromises that can change the concept of a modern shooter. Each of the four playable characters have their own weapon specialties all while retaining an infinite up-gradable pistol. The player has the ability to fire from the hip using the L1 button while keeping their momentum, giving them the ability to run and gun. There is also a stationary firing system using the L2 button, where the player may aim using the left stick and fire in a traditional horror sense.

Hand to hand combat is not null in void, but only makes a debut after the player has reached the Kazuma Kiryu portion of the game. Once he has acquired a fire arm, the combat reverts back to gun play but traditional Yakuza hand to hand is unlock-able after upgrading all abilities.

The strongest point of Yakuza game besides it's story, is it's wide array of mini games that continue to grow and develop into amazing standalone iterations of their own genre. Yakuza: Dead Souls contains:

There are also an assortment of traditional Japanese gambling and American casino games that are accessible. Also the player will have access to a massage parlor & up to 60 unique side quests.

The most recent addition to the Yakuza format has been the addition of the Kamorocho Subterranea Mission or Kamurocho Underground content. There is a specific set of floors for each character involving a separate story line and set amount of floors. These are filled with countless Zombies and Zombie Mutations, also the user will have access to exclusive content found on a secret vendor that is randomized throughout the character's floors. When the player has finished each mission for the respected protagonist, their reward is one of four final armor upgrade formulas to purchase at Kamiyama's truck.

Yakuza Dead Souls introduces a new character by the name of "Hasewaga" who is researching the zombie outbreak in Kamurocho. She is present after escaping the first quarantine zone and will than be located inside "Cafe Alps" giving three exclusive Spec Ops mission to each individual character, as well as giving reward points for specific actions completed by the player. These are marked in the start menu as "Directives" under missions and serve as an in-game achievement system that alerts every time you complete a specific request by flashing on screen under the character's health. Reward points may be redeemed inside from Hasewaga for rare items, weapon or accessory schematics.

The return of Kamiyama's Workshop is an important part of Yakuza Dead Souls, with previous iterations being dependent on hand to hand combat while utilizing Accessories or Armors for defense. Combat is now solely dependent on Weapon use, more specifically. firearms and explosives. Kamiyama's Workshop is now located on the map using an icon of an armored truck, while moving locations throughout the game. The player will earn schematics through Side Quests, Subterranea Missions or by purchasing them from Pawn Shops or after redeeming points from Hasewaga's rewards. A new feature added is the ability to donate into Kamiyama's truck as to better fortify it from attacks. Although that never comes to fruition, it does give significant discounts to purchases and upgrades while changing the actual form of the armored vehicle.

The game features a variety of playable characters with different abilities and specialty weapons. So far confirmed are:

The Fourth Chairman of the Tojo Clan, Kazuma Kiryu returns in search of the kidnapped Haruka. He is aided by his fellow companions Majima, Akiyama and Ryuji. When arriving in Kamurocho, he is unaware of any outbreak and attempts to fight the zombies hand to hand. He is quickly assisted by Misuzu Asagi, who informs him that the population are no longer normal but the living dead.After running into a former Yakuza, who idolize Kazuma, he decides it is his duty to bring peace to Kamurocho's wandering souls. He can use an Anti-Materiel Rifle.

The zombies attack Majima in his Millennium Tower suite, as he is viewing a zombie horror film. Majima being Majima seems to enjoy the idea of a zombie outbreak and beings to indulge in purifying the damned. He meets up with Daigo Dojima who convinces him to aid the Tojo and attempts to regroup with the citizens of Kamurocho inside the newly built Kamurocho Hills. Once fortification becomes no longer an option, he escorts everyone under his protection to purgatory. His weapon is a shotgun.

He was initially planning to collect a loan, but ended up getting caught up in the zombie invasion. Akiyama is the first to discover the zombie outbreak and attempts to escort Hana to safety. He is dual wielding two pistols.

After his expulsion from the Omi family his work for his own takoyaki shop brought him back to Kamurocho. Ryuji Goda was approached by Tetsuo Nikaido before the outbreak giving him an option to take back his title as chairman of the Go-Ryu. Declining the offer, Goda is than warned by Nikaido, that if something were to happen and change his mind that he would be given another chance. Ryuji Goda protects Akiyama and Majima in the batting cages to find out that Nikaido is behind the attack. He than attempts to group with Kazuma, in order to confront Nikaido and DD as they have kidnapped Haruka in Ryuji's stead. After the explosion above the Millennium Tower, he now has a gatling gun for an arm.

The former Detective, now Journalist, returns as playable companion found during Kazuma Kiryu segment of the game. This is the first Yakuza title where Date is an optional character and does not play a central role in the overall story arc.

The first ophan that Kazuma adopted as part of his Sunshine Orphanage, Haruka is constantly seen as his weak point. She is kidnapped for unknown reasons at the games start and is the reason why Kazuma must once again return to Kamurocho.

The sixth chairman of the Tojo clan, Daigo Dojima returns to protect Kamurocho by using any means possible. He meets up with Majima at Millennium tower, salvaging any survivors from Quarantine zone. Although not an unlock-able companion, Daigo is an NPC during the Majima section of the game, aiding him in combat.

The secretary from Sky Finance returns as being witness to the original outbreak in Kamurocho. She is trapped within the Quarantine zone with Akiyama and works with him to escape mean while trying to find other survivors.

DD is a scientist and arms dealer who has created a new virus from a bacteria string while in Africa. He found a financier in Tetsuo Nikaido who looked to using this new "Thanatos" drug as means to control and take over Kamurocho.

Tetsuo Nikaido is the current chairman of the Go-Ryu clan and former underling of Goda Ryuji. He has come to Kamurocho as a spectator in response to the viral outbreak that is destorying it's population and the Tojo clan. He despises Kazuma Kiryu as he believes him to be the reason his former chairman, Goda Ryuji, has fallen from grace. He kidnaps Haruka as means to bring Kazuma into the madness to deal with him, once and for all.

Misuzu Asagi is a soldier of the Japan Ground Self-Defense Force, sent in by the Japanese government to control the viral outbreak in Kamurocho. She is first introduced when Goda Ryuji breaks through the barrier of the Quarantine zone. She than aids Kazuma in his search for Haruka, giving him a weapon and access in and out of the zone. She later deploys several weapons for Kazuma to use when in battle with Tetsuo Nikaido.

So far there have been only two DLC packs released which were featured as pre-order content from Gamestop. 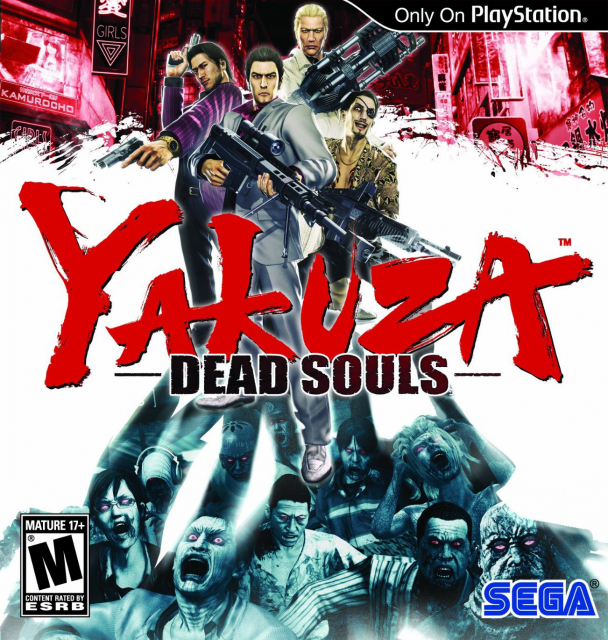