Psy-Phi is a 2005 touch-screen-based arcade fighting game developed by Digital Rex, a Sega studio led by Yu Suzuki. It was the first full-screen HD title to utilize strictly touch-screen controls. However, the game was pulled and never saw a wide release beyond location tests.

Psy-Phi is a 2005 versus action/fighting game created by Yu Suzuki and his development studio Digital Rex. It was developed as an arcade title and utilized full touch-screen controls for gameplay with no physical buttons present. The game was developed for Sega's high-definition Lindbergh arcade hardware and was first introduced at JAMMA 2005. The game had a short test run in arcades in Japan and certain GameWorks locations in the United States. However, it was pulled shortly thereafter with no official reason being given by Sega however it is presumed it was over safety concerns in regards to the heat produced by the touch-screen displays. Its original title was "Psychic Duel."

All the gameplay functions are performed on the arcade cabinet's 29" touch-screen display. Once you select your character, the game places you in an area and pits you against an opponent in a VS battle, with both players hovering in air. There are four navigational arrows on the main screen, which allow you to evade enemy attacks. With proper timing, you can also deflect an incoming projectile by touching it when it is headed your way.

The attacks in the game come in the form of projectiles. A quick tap on your opponent will send a quick projectile snipe in their direction. For a stronger attack, you can hold down on your character for an extended period to charge up a special movie, which once initiated would require you to trace a symbol that was displayed on the screen. If a player's health is below 10%, you also have the option of performing a high-powered desperation attack.

The test versions of the game never featured a complete lineup of characters as some slots were never filled. Some of the characters which were available included: 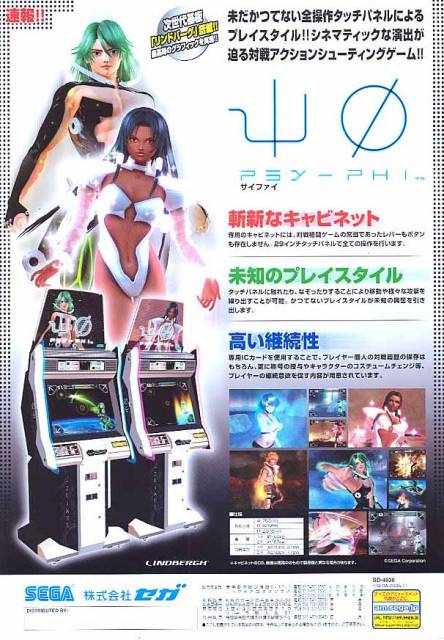