Eternal Legacy is a role-playing game developed by Gameloft. The story is about a pair of rebels attempting to steal key power stones from a mighty city. But they then are swept into a larger role of saving the world.

A role-playing game designed for the smartphone platform, Eternal Legacy is a game where characters explore a series of areas and complete a variety of quests. Combat is turn-based, with characters (in teams of three) waiting a set amount of time before attacking, casting spells, or using items. Each character can also do one of three ultimate moves if he or she dealt or received enough damage. Character customization largely consists of equipping characters with fragments found throughout the game. These fragments either grant stat boosts or allow characters to cast spells that are normally outside of their capabilities. For instance, an offensive character can use the spell Mass Heal and play like a healer if provided with the right fragment.

The game takes place in the world of Ultana, with a megalopolis beginning its ascent. With the discovery of Varsh stones as a powerful source of energy, the city of Algoad began a campaign to seek out those stones and use them to fuel an industrial revolution. The only source of resistance against seizing the Varsh stones came from the Eternal Guardians, a clan dedicated to the protection of the natural world. The city responded to this opposition by fighting the Guardians and pushing them to the brink of annihilation. Whatever remained of the clan went into hiding.

The story begins with two rebels, Astrian and Taric, entering a gladiatorial arena to steal its Varsh stone. Astrian enters a fighting contest to provide a distraction, while Taric covertly disables the arena's security systems. Most of the rebels' plan went off without a hitch, but a masked figure called Reinherz swooped in at the last minute and took the Varsh Stone for himself.

Not wanting to be outdone by their new rival, the two rebels give chase to Reinherz. They rescue Lysty, a young girl cornered by some wind wolves, who joins in on the pursuit. Taric gets separated from the group by Algoad police in the middle of the chase, leaving Astrian and Lysty to reach Reinherz themselves. The sorcerer summons a wind golem to cover his escape and knocks out Astrian by infusing him with mysterious visions and memories.

Astrian wakes up and finds himself in Lysty's palatial residence. He learns that she is the daughter of Algoad's top official, Magnate Frey, and the betrothed to military leader General Gail. Astrian in return reveals to Lysty his memory of seeing his father's unjust arrest by Algoad authorities and his desire to overthrow the city's government. He starts heading home to regroup with Taric, but Lysty follows him despite his hatred for her father; she never stepped outside the city before, and so wants to see the outside world for herself.

Astrian reaches his adopted home on the Tillian Plains but does not find Taric. Instead, he and Lysty meet with Shira, Taric's sister and fellow rebel. Shira has been having nightmares about her brother, and Lysty interprets the dream's details to deduce that Taric is held at a prison facility in Mount Dimon. They reach the mountain by capturing a large lizard called a piyagi and riding it past the dangerous wastelands. Shira freaks out when she also learns that Lysty is the Magnate's daughter. But Lysty proves her trustworthiness by helping the team fight off Algoad soldiers supervising the prisoner mining operation. They eventually find a mind-controlled Taric and defeat him to knock him back to his senses. They also accidentally awaken and defeat Agir, the spirit of fire. Apparently, the prison mining operation unearthed a large Varsh stone that contained the fire spirit, and Algoadian researchers have been studying the objects for some time.

Shortly after escaping Mt. Dimon, Astrian and his friends run into the armies of Algoad yet again. They stumble upon an Algoad slave labor camp set up to open a desert temple that harnesses the power of Wendis, the wind spirit. After freeing the captured desert nomads and defeating their slave masters, the team enters the temple and defeats Wendis to find another large Varsh stone. Reinherz then ambushes the team and seizes the stone, but not before losing his mask in the fight and revealing himself to be Astrian's missing father. Now Astrian and his friends begin to comprehend the significance of the Varsh Stones, and they need to chase down and question the sorcerer to understand why.

To go after Reinherz, Astrian and his friends need to fly to the Sonnalin Mountains and reach a tower west of the Great Ice Lake. They get their opportunity from rescuing bounty hunter Edmund, who promises to fly them to their destination if they can retrieve his airship from the Algoadian authorities. Knowing that they have bounties on their heads, the rebels use an old smuggling tunnel network to sneak into the city. They do get caught by Algoadian police, but they quickly break out of prison and make a break for Edmund's airship. General Gail intercepts the rebels and almost lands a killing blow on Astrian in combat, but Lysty steps in between the two and forces Gail to choose between either killing his betrothed or letting her and her friends go free. The general chooses the latter, and the rebels take off on the airship to the Sonnalin mountains.

Astrian and company reach the icy mountains and find the answers that they were looking for. They climb the Tower of Knowledge and encounter Qaniit, an old fox sage who has been expecting the team's arrival for some time. The sage tells Astrian and Lysty that they descended from the Eternal Guardians and that the world is in danger. That is, the rapid extraction and consumption of Varsh stones by Algoad's industries are weakening the constraints of Moon, a godlike entity of chaos and the Void. To prepare the two for the trials ahead, Qaniit summons Vatn, the spirit of water, and pits it against Astrian and Lysty.

Taric, Shira, and Edmund later confirm Qaniit's suspicions; they have been infiltrating several Algoadian bases and accessing their top secret files. They report that Magnate Frey knew of Moon all along and that the city's exploitation of the Varsh stones was a deliberate attempt to awaken it from its dormant slumber. Alarmed by these revelations, the whole team and Qaniit break into a nearby Algoadian fortress in an attempt to destroy Moon's cocoon there. They battle both General Gail and Magnate Frey, who wanted to harness the entity's powers out of paranoia towards the natural world and its supposed conspiracy to destroy all of mankind. As if on cue, Moon awakens to possess Frey, infuse him with its powers, and forces him to kill his own daughter. Astrian and his allies deeply mourn Lysty's death, but they have bigger things to worry about, for the world is now imperiled by Moon's return.

Reaching and stopping Moon requires the spirits of earth, water, fire, and air. With three out of four spirits, Astrian and company fly to the Grand Forest looking for the final Varsh stone housing Erda, the spirit of earth. They locate the stone in a secret temple, but entering it is another matter entirely. To be granted access, the team has to undergo various tests of will to prove its collective purity of heart. To give some examples, bickering siblings Taric and Shira have to prove that they can work together. Astrian has to show that his anger over his rough childhood does not control him. And Edmund has to demonstrate his newfound love for his fellow man after living a life devoid of personal attachment. Passing these tests and entering the temple, the team also encounters Reinherz, who reveals himself as both a Guardian and Astrian's paternal uncle (not father). Astrian does not forgive Reinherz for abandoning him as a young boy, but he does allow him to work with the team. Together, the Guardians and their friends find the last Varsh stone and capture the earth spirit.

With all the spirits accounted for, Astrian and friends fly to the airborne Oracle's Temple, setting up a final showdown against Moon and his minions. They beat Moon's influence out of Magnate Frey (who proceeds to commit suicide when he remembers killing Lysty) then defeat Moon himself in an epic battle. Slaying the Void Walker causes the temple to fall back to earth, and the story ends with a shot of the entire team surviving the crash in the lush Grand Forest. 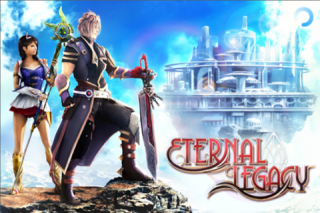