Lone Survivor is a psychological 2D adventure game set in the post-apocalyptic world of an unnamed city. The world has been ravaged by a disease turning people into monsters. The player takes the role of "You" and has to explore the grotesque and twisted surroundings in search of supplies and an escape route. While contending with hunger and declining mental health. As he explores he encounters characters and situations which call into question the nature of reality and his perception of it.

As the story progresses, certain aspects of the environment change in such a way that brings into question the protagonist's mental health. For example, doors that were locked will suddenly be open or solid walls will become decayed to the point that they can be climbed through. By "looking deeply" into dusty mirrors the protagonist is transported between different locations, and can move between different areas via a series of holes that lead into bizarre hallways of flesh and organs. This navigation system links the world in a seemingly illogical way that distorts distances and reinforces the insanity motif that runs through the game.

The protagonist collects various food stuffs, pills, toys, tools and notes which can be inspected as well as consumed or read, when appropriate. Batteries are also a key commodity as they are needed to power the player's flashlight, and many objects and locations cannot be inspected unless they are properly illuminated. Statistics are communicated directly through the protagonist by him declaring his current needs with statements such as, "I'm getting tired" or, "I'm starving" rather than a heads up display of a health bar or equivalent. The protagonist quickly acquires a map and marks off open doors, blocked paths and points of interest as they are discovered, a la Silent Hill.

The protagonist starts out without a weapon or any means of fighting the monsters. His only way of getting past the monsters is to hide in an alcove and sneak past them. Alternatively, he can bait them into walking past a hiding spot with chunks of rotting meat, then hide and wait for the monster to pass.

The monsters are attracted to his flashlight, so he has to choose between seeing what's in front of him and attracting every monster nearby. Emergency flares can be used to stun the monsters for a short time, allowing the player run past them unharmed.

Once a firearm has been acquired, the protagonist must enter a firing stance to shoot it. Once in firing stance, he will remain facing the same direction, allowing him to back away from monsters while still keeping aim. His pistol can hit monsters from a long range, but the noise attracts other monsters nearby. He can also aim at an upward angle, allowing for head shots that will drop enemies faster but requires closer proximity to the target, or aim downward to shoot at their legs, staggering them.

The game is exceptionally vague with its story up front, the protagonist is unsure how this situation came to be or how long he's been trapped in his apartment. He simply explains that some unknown disease has spread through the known world, killing off almost everyone and creating horrible monsters that wander in search of flesh. He even refuses to divulge his name, claiming it doesn't matter, and expressing his only desire is to not die alone.

The player can piece together what happened through notes, diary entries and messages scrawled crudely on walls. It is unclear whether the characters that the protagonist encounters are real or projections of his psyche. They disappear regularly or are revealed to be corpses, long deceased. He also has a tendency to converse with inanimate objects such as Chuck, the house plant located in the hall outside the main character's apartment, and the sleepy cat plush the character carries with him.

In addition to the main plot, there are a few survivors the protagonist can help. Some give him items in return, but they mainly stabilize his mental health. Other things, like eating good food, getting enough sleep, and bringing some semblance of normalcy back to life also increases his sanity.

Over the course of the game, he also collects several pills. Taking these lets him sleep on an empty stomach, but causes him to have strange dreams. Some give him items, some ask him questions, some affect his sanity. His sanity determines what happens to him when he finally escapes.

There are currently 3 known endings, with the possibility of a 4th ending that might be added later.

This updated version of Lone Survivor, being billed as "The Director's Cut," features expanded content exclusive to the PS3 and Vita. According to a post by Byrne on the PlayStation Blog, this includes over 20 new items, improved lighting system, two new "extensive" sidequests and a new "Yellow" ending, which will feature new background music. The Vita version also has touchscreen controls added. This version supports cross-save and cross-buy across both hardware platforms, and was released on the PlayStation Store on September 24th, 2013.

This version was later ported to PlayStation 4 as well. 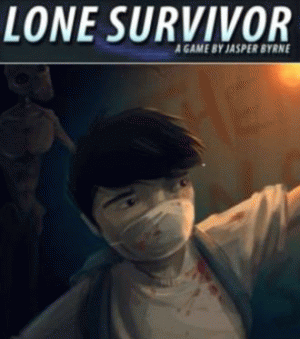