Pink blobs, fairies and Living Toys are quite common in Tamsoft's adventure RPG.

Guardian's Crusade is an Adventure RPG which revolves around the three main characters, a warrior named Knight, his fairy friend/advisor Nehani, and a pink blob called Baby. The game begins with Knight and Nehani going off to discover why the village he lives in is suffering from a form of plague and upon returning to his village, encounters the pink blob Baby. Baby is blamed for causing the plague so Knight and Nehani set off to return Baby home.

Guardian's Crusade features standard turn based battling but features a Living Toy function which allows the player to summon Living Toys that the player has encounter outside of battle. Each Living Toy has its own special ability and can turn the tide of battle. The game is unlike many other RPGs in which it does not feature random battling, rather it has enemies in the form of tadpole-like creatures that only engage the player in battle if the player comes in contact with the monster.

The game follows Knight and Nehani on their journey to save their village from a  mysterious plague that is causing the village's crops not to grow. Along the way, they meet a pink blob (who they name Baby) who is given to them under mysterious circumstances and starts to fight for them. The members of the village believe that the Baby is causing the plague and send Knight and Co. off to return Baby home. Not knowing exactly where to go, the party sets off towards God's Tower to see if Baby belongs there.

Guardian's Crusade has a speed based turn battling system where the character with the highest speed can act first. Knight is the only character who the player directly controls in the game as both Baby and Nehani take actions (if at all) at the CPU's will. The player can choose from Attack, Living Toys, Items, Guard, Giving Advice to Baby, and Running from the battle.

Nehani occasionally heals the player or attacks the enemy. Baby can also transform into monsters if Baby has learned the transformation. It is not possible to tell Baby to transform.
Jade Cocoon: Story of the Tamamayu Final Fantasy VII 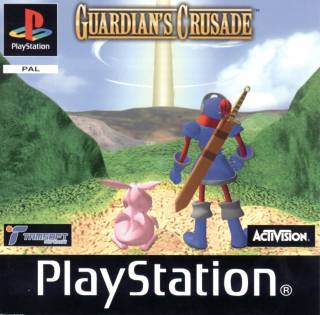