A DSiWare arena combat game with more than a few similarities to Virtual-On.

Clash of Elementalists is an arena fighting game developed by Amzy. The game was released in Japan on April 27, 2011, as "Battle of Elemental". Teyon later published the game to the North American eShop on April 11, 2013. The game is very similar to the Cyber Troopers Virtual-On series, the key difference being that four magical girls stand the place for Virtual-On's mecha as playable characters.

The game received a 3DS remake titled "Battle of Elemental REBOOST" (バトル オブ エレメンタル REBOOST) in 2016 for the Japanese eShop.

Clash of Elementalists, like Virtual-On, features very unorthodox controls. Each of the girls has a Normal Shot (R button), Wide Shot (L button) and Power Shot (L+R). The chosen character can perform a short Boost (Y button), jump (X button) and, while in the air, quickly drop to the ground (B button).

The player character locks onto the opponent when the enemy is in her sights; this is signified by a single magic circle that surrounds the enemy. During a jump, the player character automatically turns to face her opponent and therefore establishes a lock-on. This lock-on is broken whenever the opponent moves out of the player's sight and can only be re-established by jumping. The player's attacks will attempt to home in on a locked-on target.

Each weapon has a corresponding Magic gauge that loses charge whenever an attack is executed. If there is less Magic available than the weapon requires, it will be temporarily disabled. By pressing the boost button and a weapon button simultaneously, the character will perform an altered attack that usually requires more Magic.

If the player character gets close to the enemy, she will enter hand-to-hand combat; this is signified by two magic circles around the opponent. At close range, the player's repertoire changes into a set of Magic-free melee moves. In hand-to-hand, the player can block by holding the B button. 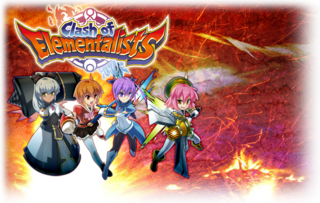