If you want to become a better space pirate, you need to train up.

Space Pirate Trainer is a virtual reality shooting gallery game that pits players against wave after wave of small, spherical robots. Players have a weapon in each hand that can be configured in a variety of ways, including shotgun, railgun, shield, and melee options. The robots fire lasers at the player, requiring players to dodge around or otherwise deflect the lasers to avoid taking hits. After taking three hits, the game ends.

The game was originally released in Early Access alongside the release of the HTC Vive in 2016, and was fully released in October 2017 with support for Oculus Touch and Windows Mixed Reality headsets.

Space Pirate Trainer has since been ported to PlayStation VR and the Oculus Quest.

There are six gun modes, changeable with the trackpad on each controller. From the top clockwise, we have:

1. The QuarkCannon - fires off tiny little rounds and also includes a sight to see exactly where the round is headed

3. Automatic - Sends off an endless stream of lazer fire, slightly slower than the rapid fire

4. Rail Gun - Hold down your trigger to charge up - because this gun will destroy any droid with one single shot!

5. Ray Gun - fires off a Ghostbuster-esque stream at droids. If you cross the streams it sends out a huge lightning bolt!

6. Ion Grenade - Fire out a grenade, and then pull the trigger again to ignite

Cycle-mode - Easy to use, but a little slower

Pro-mode - harder to learn, but faster once you got it! 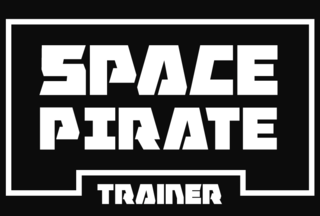