A spiritual successor to Quake III Arena, bringing a fresh take to the fast-paced first-person shooter genre with unique characters (each with their own attributes and special abilities).

Quake Champions is an upcoming free-to-play multiplayer-focused sci-fi fantasy first-person shooter in development by id (in conjunction with Saber), and will be published by Bethesda for the PC. The game was pre-released in pay-to-play Steam Early Access form since August 22, 2017, and was made free-to-play on August 10, 2018.

An arena-based spin-off of the Quake series, Quake Champions combines the classic arena-style gameplay of Quake III Arena with the dark fantasy setting of the original Quake. In addition to numerous gameplay changes (such as the starter weapon and base health/armor systems), each of the game's playable characters are unique and boast their own unique attributes and special abilities. Similar to Quake III Arena, the game features characters from other id games, including B.J. Blazkowicz from Wolfenstein II: The New Colossus and Doom Slayer from the 2016 remake of Doom.

The game received numerous changes since its original pre-release, including a brand new soundtrack (by Andrew Hulshult), new content (including maps, characters, and game modes), and a new rewards system (replacing the "backpack" system with linear Champion-specific progression and an optional, seasonal paid "battle pass").

The game includes a total of 11 usable weapons, all of which have customizable appearances (with unlockable weapon shaders and skins, many of which are based on weapons from earlier id games).

In the base game, players have the option to choose from one of three starting weapons (Machinegun, Shotgun, and Nailgun) to spawn with. 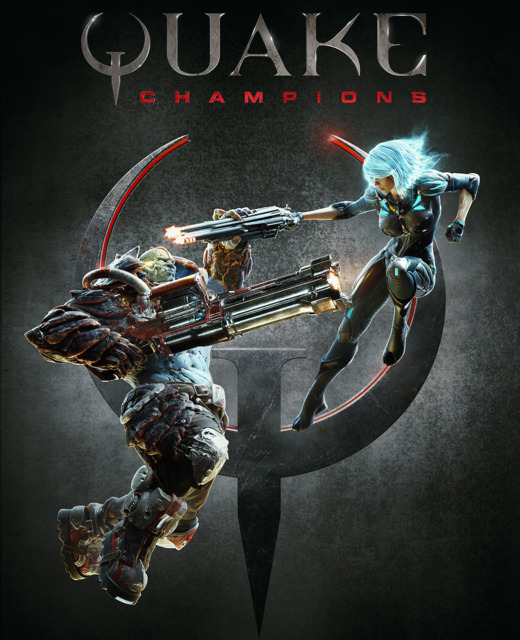