The Legend of Zelda: Oracle of Seasons

The Legend of Zelda: Oracle of Seasons is one of the two Oracle games released on the Game Boy Color. It features the ability to change the four seasons as Link goes on a quest to save the Oracle of Seasons, Din.

The Legend of Zelda: Oracle of Seasons was released simultaneously with The Legend of Zelda: Oracle of Ages, and the two of them make the seventh and eighth games released in the Zelda franchise. The player once again controls Link as he travels on an adventure to destroy evil and rescue Din. There were initially going to be three games released simultaneously, but the complexity of the system made it an impossible feat and the third game was cut.

The development of the game was handled by a company called Flagship. This marks one of the few times a Zelda games production has not been handled first-party by Nintendo. Oracle of Season's counterpart game, Oracle of Ages, focuses more on puzzles whereas Seasons focuses much more on action and combat. The two games can also be linked together via passwords to unlock new items and other things otherwise unobtainable during a regular playthrough of the game.

In Oracle of Seasons, the Triforce drops Link in the land of Holodrum. He happens upon a traveling band playing in the forest and meets Din, the Oracle of Seasons. He then witnesses her kidnapping at the hands of the evil general Onox. Impa tells Link that they were headed towards the land of Hyrule and tells him to find the Maku Tree. The Maku Tree tasks him with getting the eight essences which will allow Link passage into Onox's castle. What follows is classic Zelda gameplay as Link attempts to obtain all eight of the essences.

The player, as Link, then proceeds to collect all of the essences needed to complete the game. After acquiring them all in a variety of ways, meeting both unique and flat-out strange characters along the way, Link gains entrance to Onox's castle. He defeats Onox and rescues Din. Koume and Kotake (also known as Twinrova) watch Link from afar, plotting their resurrection of Ganon. If Oracle of Seasons is the link game, however, then Koume and Kotake begin to battle with Link.

Oracle of Seasons is a traditional top-down Legend of Zelda game. In the game, the player (as Link) must traverse a variety of colorful dungeons to reach the ultimate goal of defeating Koume and Kotake (otherwise known as Twinrova) and rescuing the world from demise. Items and power-ups are collected on the adventure, allowing Link to do a variety of things, from jumping or creating blocks.

One of the central items in the game is the Rod of Seasons. This item allows Link to change the season if he is standing on a tree stump. There are many things in the game which change depending on the season. Examples include lakes freezing over and trees losing their leaves.

A new system implemented in Oracle of Seasons is the Gasha Nut system. By planting a Gasha Nut in fertile soil, a Gasha Tree will grow. The tree will produce fruit, which in turn will grant Link with an item of some sort (usually a Magic Ring, which can subsequently be appraised by a jeweler).

Like its handheld predecessor Link's Awakening, Oracle of Seasons has some short sections in which Link travels with a side-view (as opposed to the traditional top-down view). These sections pay homage to the Mario games, and include enemies such as Cheep-Cheeps, Podobos, and Thwomps.

A unique feature of this game and Oracle of Ages is the ability to input a password from one at the start of the other, turning the other into a direct sequel with extra hidden secrets and a continuing story. This can also be done by hooking up two Game Boys with a link cable, one with the beaten game and the other with the one the player wishes to have the progress transferred to.

Though Link does not start the game with all the items from the other game, he does begin with the wooden sword (instead of having to find it at the beginning) and four heart containers instead of three. Certain characters will also know you as the hero of the land from the previously beaten game (in Oracle of Seasons, Link will be known as "Hero of Labyrnna"), and you'll be reunited with the same animal companion as the other game as well.

Beginning a linked game also expands the plot away from the main Onox story, tying it into the main series further by having Zelda arrive and get kidnapped by Twinrova, who are hoping to sacrifice her to bring Ganon back. The game then concludes with an extra dungeon and a battle against Ganon.

The last major aspect of the linked games are the inclusion of secrets, where certain characters will ask you to tell a secret to someone else. Upon telling the correct person the secret (a specific combination of characters), you'll be given a new item, generally an upgrade to a previous one, eg the seed satchel to a larger one. These are not necessary for achieving the "true" ending, but can give you items that you would be unable to receive otherwise, such as Bombchus. 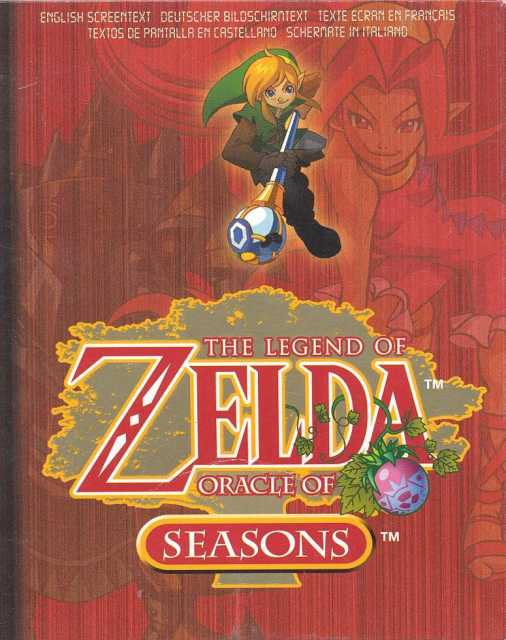