MTG Arena is a digital collectible card game by Wizards of the Coast.

Magic: The Gathering Arena, commonly referred to as MTG Arena, is a digital adaptation of the paper, collectible trading card game Magic: the Gathering released by Wizards of the Coast in 2018. MTG Arena is distinct from it's MTG: Online predecessor due to it's free-to-play payment format and inability to trade collections with other players, eliminating any virtual market for selling and purchasing cards.

MTG Arena follows the same rule structure, set rotation, and restrictions the paper card game follows. Unlike the Magic: The Gathering - Duels of the Planeswalkers series, the MTG Arena gameplay system will adapt to any changes Wizards of the Coast applies to the paper card game, such as banned cards or adjustments in rules or mechanics.

A distinguishing feature of MTG Arena from the broader Magic community is it's restricted card library. The Arena platform only features cards from sets released during it's lifetime. The first sets to be included on MTG Arena's release included:

Magic: The Gathering Arena uses two virtual currencies: Gold and Gems. Gems can be purchased with real money or are otherwise distributed sparingly. Gold is rewarded when a player wins games or complete quests. Both currencies can be used to purchase entry to Events, packs of random cards from a specific set, as well as cosmetic features such as card sleeves or character skins of well known MTG characters. One pack of 14 cards is priced at 1000 gold. A collection of three packs is priced at 600 gems. 750 gems costs players $4.99 USD to purchase, with bulk purchase price reduction at greater quantities ($20,000 for $99.99 is the highest).

Magic: The Gathering Arena features two categories for matchmaking with other players, Events and Find Match. Matches are single games with another player with no entry cost. Events are of a series of games in a league style, with a Gem or Gold entry fee and reward scaled according to the player’s win streak. Events end when either the player reaches the win cap, loses a set number of times, or voluntarily resigns.

Events include, but are not limited to:

Events rotate regularly as new sets are released and bonus content is cycled.

The store acts the primary interface for purchasing gems and packs of random cards. As MTG Arena has progressed, Wizards of the Coast has introduced cosmetic features that users can purchase with their virtual currency.

Magic: the Gathering Arena uses a Season based ranking system that last a month each. Every month, the season is refreshed and users are scaled in difficulty according to their previous rank. They are also given Season Rewards according to their final rank of the season. The MTG Arena ranks are as follows:

This ranking system is applied for both the player's Limited and Constructed performance.

A player's account can have any number of decks across any of the available formats on MTG Arena, these include, but are not limited to:

Traditional deck sizes across these formats range from 60 to 100 cards, dependent on format rules and deck content regulations.

From the Deck screen, users can access their collection, the primary way of navigating one's card library. Here players can see all cards that they've collected along with art variations for particular cards they've purchased. This is also where users are able to craft cards that they have not collected. That's right, crafting.

Since trading has been removed in this iteration of MTG, users will have to craft individual cards through redeemable Wildcards. Wildcards can redeem a card up to a specified rarity. Wildcards are acquired through opening cards when the player already owns 4 copies (the maximum), at a scaled drop rate when opening packs, or by opening six packs and progressing the 'Wildcard Wheel'.

Once a Wildcard has been redeemed for the chosen card, it cannot be undone or 'dusted'.

Mastery is Wizards of the Coast's Season Pass product, where playing games unlocks exclusive rewards according to the player's 'Mastery Level'. Mastery Level is progressed by completing daily quests and winning games. Players who purchase the mastery pass will unlock bonus cosmetics, entry passes to draft events, packs, and even gems with each consecutive level. Players who do not participate in the Mastery Pass will still receive gold rewards from quest completions and occasional packs or Mastery Orbs for their respective level in the season. Mastery Orbs are used to unlock set-specific alternate card art. 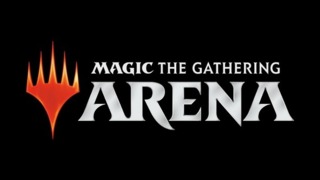