A top-down grid-based action-puzzle game similar to the Sokoban series, as high-school nerd Chip must traverse a series of increasingly-difficult labyrinths filled with numerous puzzles and obstacles.

Chip's Challenge is a top-down tile-based action-puzzle game developed by Epyx and published by Atari for the Atari Lynx in 1989.

As high-school nerd Chip McCallahan, players must venture through a series of increasingly-difficult labyrinths in the school's science library to impress Melinda the Mental Marvel and gain membership to the exclusive "Bit Busters Club". Armed only with the ability to push blocks (similar to the Sokoban series) and collect power-ups (allowing him to walk on dangerous and unreliable surfaces), Chip must collect all computer chips and reach the exit in the time limit while avoiding numerous obstacles.

The game received ports to multiple computer systems in 1990, namely the Amiga, Atari ST, Amstrad CPC, Commodore 64, ZX Spectrum, and MS-DOS PCs. All of these were published by U.S. Gold and most of which were ported by Images Software (with the exception of the MS-DOS version, which was ported by Audio Visual Magic).

The gameplay of Chip's Challenge is simple. The player must navigate through 144 levels (not including bonus ones) collecting computer chips in order to proceed to the next level. The first 8 levels are lesson levels, designed to help the player understand the challenges present in the game. Chip also has to deal with hazards and puzzles such as locked doors, monsters, trap doors, etc to proceed. Blocks may also be needed to move or used to get further through the levels. Chip can be moved by the mouse button or the arrow keys, and has to collect all the chips to pass the socket and reach the exit square. Not all levels have sockets, so Chip may only need to find his way around the level to reach the exit square. Each level also had a unique password used to save the player's progress through the game. 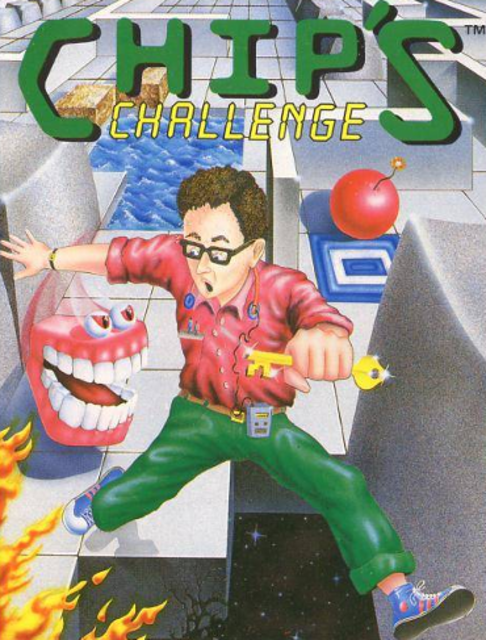