A free-to-play battle royale spin-off of the Titanfall series, trading the series' trademark mechs for last-squad-standing action starring a variety of unique "Legends".

Apex Legends is a free-to-play sci-fi first-person survival-shooter developed by Respawn and published digitally by Electronic Arts for the Xbox One, PlayStation 4, and PC (via Origin) on February 4, 2019. It was later released via Steam on November 4, 2020 and received a port for the Nintendo Switch on March 9, 2021. A mobile version for iOS and Android devices is in development.

A spin-off of the Titanfall series, Apex Legends brings a modern battle royale twist (similar to PLAYERUNKNOWN'S BATTLEGROUNDS and the Battle Royale mode in Fortnite) to the fast-paced futuristic universe. As such, some of the series' traditional gameplay elements (including the Titan mechs and wall-running) have been scrapped.

The game takes place sometime after the end of the Frontier War (the conflict set in the main Titanfall games), where those in the now-barren Frontier worlds are now making their way to a remote cluster of planets known as the Outlands. Used to spending their lives in conflict, some of its inhabitants participate in a bloodsport known as the "Apex Games".

Each standard match of Apex Legends features either 20 three-player squads (for the original "Trios" mode) or 30 two-player squads (for the post-release "Duos" mode), with each squadmate as their own unique "Legend", as they scatter for loot and fight to be the last team standing. Similar to other Hero Shooters (such as Overwatch), each Legend has a variety of special abilities to aid themselves (and their teammates) in battle. Players can make use of two unique features to aid them in combat: Intelligent Inventory (an intuitive inventory and weapon management system) and Smart Comms (a contextual "ping" system to help communicate with squadmates).

As standard with similar free-to-play games, Apex Legends uses a multi-currency system (including "Crafting Metals" for common items, "Legend Tokens" for rarer items, and premium "Apex Coins", the latter of which are usually purchased with real money), randomized loot boxes ("Apex Packs"), and a seasonal multi-tier Battle Pass system for time-limited rewards. Certain characters, mainly newer ones, must be purchased with either Legend Tokens or Apex Coins.

Apex Legends features a robust pinging feature that allows players to communicate in-game through HUD icons and character dialog. A single tap of the pinging button/key will place a neutral marker, while a double tap will call out hostiles in that area. Players can also hold down the button/key to access more options. All items in the world, such as weapons, ammo, attachments, ziplines, supply crates, and more, can be pinged to call them out to squadmates.

The standard game mode, with each match putting up to 60 players in one gigantic arena, with teams split into threes (Trios) or twos (Duos).

Included with the original release, Kings Canyon is a temperate island on the planet Solace with several scientific outposts from the defunct Interstellar Manufacturing Corporation.

Its notable features are the Supply Ship (a roaming mobile aerial Hot Zone that travels to random destinations on the map) and Loot Ticks (stationary destructables that can be destroyed for loot).

A special nighttime variant was used for the limited-time Shadowfall game mode, and was later used in the map rotation (as "Kings Canyon After Dark").

In Season 2, the map was revamped after an EMP blast allowed nearby wildlife to invade, causing destruction of certain settlements near the river at the center. Leviathans are monolithic creatures that can raise their feet to expose loot under them, but can kill unsuspecting Legends by stomping down. Flyers are winged creatures that can drop randomized death boxes when eliminated. In addition, new settlements were added, including a six-story structure known as the Cage.

In Season 5, the map was further changed after a large chunk of the southwest portion of the map (containing the former Skull Town and Thunderdome) sank into the sea, forming the Broken Coast and its newly-constructed industrial rig (Salvage). In addition, the northeast portion of the map was reworked with a massive rig (Offshore Rig) and an unearthed structure (Capacitor). Leviathans also made their way off the island. This change also introduced Charge Towers (massive glowing devices that, when activated, restores the Ultimate Ability of all players on its platform) and Loot Bunkers (special armory bunkers that unlocked throughout the Season).

In Season 8, the map was further changed after a large gunship crashed on the northwestern portion of the map (forming the Crash Site). Slum Lakes was also reworked into Spotted Lakes. Loot Bunkers and The Farm were removed and Leviathans returned. This change also introduces Observation Towers (tall sniper towers which require activation) and Explosive Holds (artillery pods that can be opened with explosive ordnance).

Added in Season 3, World's Edge is a volcanic area on the planet Talos made inhabitable due to heat-reducing towers. However, the land was made deserted by a lethal flash freeze due to an exploded tower ("The Epicenter") decades before.

Its notable features include Geysers (which launch Legends faster than Balloons), Cargo Bots (which fly around the map and can be downed for loot), and Vaults (which are full of rare loot and can only be accessed through Vault Keys dropped by some Cargo Bots). It originally featured a Train, a roaming mobile Hot Zone that travels around a specific path on the map.

In Season 4, the map was revamped after the arrival of a gigantic structure known as the "Planet Harvester", destroying some settlements while splitting Capitol City into two fragments (East and West). It also added a new northern settlement, Survey Camp, which introduce new "Weapon Racks" (guaranteed weapon spawns). In addition, this season added Updrafts, where players who jump into lava fissures will be carried back up while taking damage.

In Season 6, the map was further changed as Hammond Industries continued developing on it. New passageways and tunnels are added, as well as new settlements (Countdown and Staging) and new usable panels, or "Blast Walls". Mirage Voyage, as well as the roaming Train, were also removed.

Added in Season 7, Olympus is a utopian city floating in the clouds above the planet Psamathe. However, it was evacuated 40 years after an accident led to the creation of a massive bubble of Phase energy, which has been growing unstable.

Its notable features include Tridents (three-seat vehicles for quicker transportation) and the Phase Runner (an always-on Phase portal connecting between multiple areas throughout the map). Later in the Season, Loot MRVNs were introduced that gave loot when charged and interacted with.

In Season 9, the map was changed as a large vessel (known as The Icarus) docked on the Crossroads.

Added in Season 9, Arenas is a competitive mode where two teams of three engage in round-based combat. Players must purchase all of their starting weapons, gear, and ability charges prior the start of each round (similar to games like VALORANT and Counter-Strike: Global Offensive), and must eliminate all opponents to win.

After purchasing weapons, players can spend additional amounts to upgrade them in pre-made kits (first for a Common kit, then for a Rare kit, then for an Epic kit). Each upgrade also unlocks their corresponding optics, which can be switched for free. Weapons do not carry over between rounds, and ammo cannot be purchased.

While player Abilities are unlimited in Battle Royale mode, Arenas imposes some limits, such as a limited amount of times (or "charges") each player can use their ability in a single round (forcing them to purchase additional charges prior to starting the round if they want more). Ultimate Abilities are no longer built-up over time and must be purchased.

Similar to Battle Royale, Arenas mode makes use of The Ring to herd players into a specific portion of the arena (which changes on each round).

Players can find a variety of weapons in the battlefield, each split into six ammo types (Light Rounds, Heavy Rounds, Energy Ammo, Shotgun Shells, Sniper Ammo, and Arrows). While all weapons (with some exceptions) have the same rarity, weapon attachments vary in rarity.

Players can only equip two weapons at a time and cannot hold them in their main inventory. Equipping them does not take up any of their inventory slots.

In rare occasions, players can find special Legendary versions of a weapon (known as Fully Kitted weapons), all of which have a unique predetermined set of attachments (none of which can be replaced). In addition, some of the more powerful weapons (such as the Kraber) are Heirloom, can only be found in Care Packages, have ammo that cannot be replenished, and cannot use attachments.

Each player has four special slots, each of them reserved for a specific piece of Gear:

Similar to weapons, players cannot hold Gear in their main inventory and equipping them does not take up any of their inventory slots.

In addition to Gear slots, players have access to an additional "Survival" slot for special deployable utility items. Like Gear, players cannot hold these items in their main inventory and equipping them does not take up any of their inventory slots.

All Recon characters can detect the next ring's location by scanning survey beacons. Prior to Season 6, this was restricted to Pathfinder.

As the "free tier" of each Battle Pass does not include many unlockables, players can opt to purchase the "premium tier" for 950 Apex Coins. Each fully-upgraded premium Battle Pass grants the player 1000 Apex Coins, allowing the player to earn their purchase back and pay-it-ahead for the next Season. 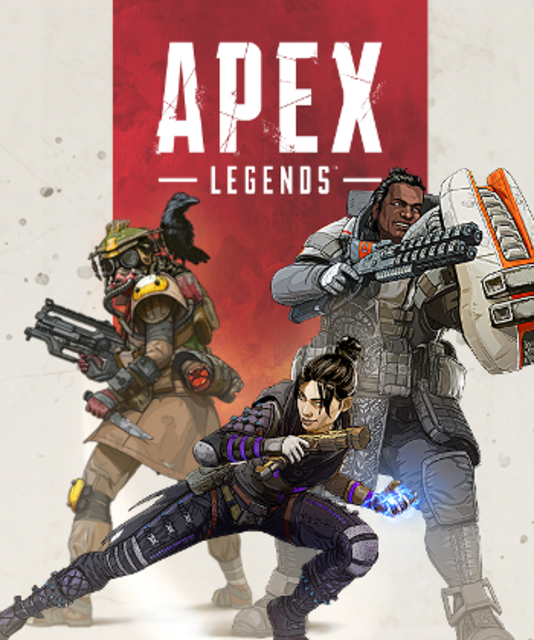