The much-anticipated follow-up to Doom, Quake was one of the first games to make use of fully polygonal graphics and hardware acceleration, and is often credited as the point of origin for many lasting trends in the FPS genre, such as standardized mouse look and the WASD control scheme.

Quake is an action-oriented first-person shooter developed by id Software and released on June 22, 1996. It is often cited as one of the most influential games in the genre, credited among other things with revolutionizing PC gaming with hardware accelerated true 3D graphics and bringing competitive multiplayer gaming to the masses.

Its popularity spawned two official expansion packs ( Scourge of Armagon and Dissolution of Eternity) in addition to laying the foundation for an extremely successful franchise. It would also go on to receive extensive support from its fan base in the form of numerous maps & mods, whose creators in many cases would become successful game developers in their own right.

Quake would also lead to several trends which would have an impact beyond the FPS genre. Arguably the origin of machinima, the Quake engine would be used to create films such as Blahbalicious and The Seal of Nehahra, movies which often had little or nothing to do with the game itself. Quake multiplayer became one of the first competitive games to be treated as an eSport, with skilled players such as Dennis "Thresh" Fong and Johnathan "Fatal1ty" Wendel becoming gaming celebrities in Quake's limelight. Speed running site the speed demos archive was created after the release of Quake. The engine would later be licensed for use in various other products, such as Hexen II, X-Men: The Ravages of Apocalypse, and Half-Life, in addition to providing the foundation for the Quake II engine.

Though Quake is not a particularly story-driven game, the manual provides a basic setup for the events that transpire, which is noticeably similar to the backstory for the first Doom. While developing teleportation devices known as slipgates, a covert organization, presumably under the jurisdiction of the US military, makes contact with a hostile extra-dimensional being, codenamed Quake. Quake begins using Earth's own technology against it, teleporting his death squads deep inside the human installations which house the slipgates, leading to untold carnage and destruction. Fearing that the situation will soon become untenable, a commander involved in the project contacts the protagonist of Quake, an unnamed though highly skilled operative.

Finding himself drafted into Operation Counterstrike, the protagonist is tasked with finding and stopping Quake by any means necessary. Not long thereafter, the installation is attacked, and the unknown soldier is left as the sole surviving member of Operation Counterstrike. He immediately resolves to seek out Quake on his own...

Very little narrative is provided in-game, save for a few congratulatory sentences when a player finishes an episode. After gathering the four runes necessary to unlock the game's final confrontation, Quake is revealed to be Shub-Niggurath, a Lovecraftian elder god that exists as a massive faceless entity of flesh and writhing tentaces. The being is seemingly impervious to all damage, though the nameless soldier is able to defeat her by unorthodox means.

Just like Doom before it, Quake is a fast-paced FPS with a linear progression of levels broken up into episodes. The objective of each level is simply to reach the exit, killing anything dangerous along the way. There are numerous obstructions to slow the player's progress, such as traps and locked doors which must be bypassed using buttons, keycards or keys.

Despite these additional considerations, however, Quake is almost entirely focused upon "run and gun" first-person action. After each level, the player is presented with level statistics showing their total completion time as well as the number of enemies killed and secrets discovered compared to the maximum.

Quake's four episodes can be tackled in any order, though there is an intended sequence. At the beginning of each episode, the player starts with only the Shotgun and the Axe, and weapons collected in each episode are not carried over to the next. Once the player has completed all four episodes and gathered the four magical runes within them, the pathway to Shub-Niggurath and the final confrontation is opened.

Episode 1: Dimension of the Doomed

The mystical past comes alive...

Episode 2: The Realm of Black Magic

Ancient castles and strange beasts ahead...

Primal fear in a strange dimension...

The original Quake engine is commonly refereed to as "NetQuake".

About six months after Quake was released, id Software released an update, dubbed QuakeWorld, which utilized the UDP protocol and moved many tasks that had previously run on the server side to the client. This allowed online games consisting of 32 or more players to take place between players on dialup with relatively low latency. Tournaments all over the world still include Quake in their playlists, but most first-person shooters have since moved away from the unyielding speed and lethality of the original Quake.

Quake has more realistic physics than Doom, but they are more vulnerable to abuse. Tactics such as bunny hopping and rocket jumping originated in Quake multiplayer. Skilled players can abuse Quake's physics to move faster than normal, and obstacles can often be bypassed effortlessly. These physics have been implemented as a feature in some modern mods, including Fortress Forever and Garry's Mod.

Quake had an active mapping scene which spawned two maps that are widely regarded as some of the best competitive Quake has to offer. They are played in almost every QuakeWorld, Quake III Arena and Quake Live tournament and have been ported to several other Arena style FPS.

Like id Software's previous title, Doom, Quake had a very active modding scene, which was supported by id with the release of SDK's, level editors and exhaustive information about the game's file system and the built-in scripting language QuakeC. These ranged from sound, model or texture replacements, additional levels, to total conversions, changing the core gameplay.

Some of the earliest mods were Quake Rally, which turned Quake into a racing game with rather detailed vehicle physics for the era, and AirQuake, turning it into a third person multiplayer dogfighting game, with a large selection of real world jets.

One of Quake's most popular mods was Team Fortress, which was released in 1997 and turned it into a class, team and objective based multiplayer game. This spawned similar mods for other games and resulted in Valve acquiring the developers, having them create Team Fortress Classic for Half-life and later Team Fortress 2. The map 2forts has been one of the popular ever since the original mods release, and remains one of the most popular maps in Team Fortress 2.

The website also features a section called "demos" which contains all the quake speedruns. The main runs are split up into three main categories: any%, 100%, and cooperative. The runs themselves are split up into several sub-sections including id Levels, Hipnotic Levels, Rogue Levels, Custom Episodes, and Custom Levels. The first 3 sections are for official levels created by the developer and the last two are for user created levels. Within each section is a list of all the levels featured in that section. The Cooperative section has different sub-sections: Easy Runs, Easy 100%, Nightmare Runs, Nightmare 100%, and Mad Coops (3 player runs).

There is a special fourth category titled "Marathon Demos". This section features single segment runs of whole episodes or the entire game/expansion pack. These runs are also have seperate categories for easy any%, easy 100%, Nightmare any%, and Nightmare 100%. In addition to this, the section also has cooperative runs and record time progression.

The weapons of Quake are a pretty straightforward affair, consisting almost entirely of point-and-shoot armaments with no alternate firing modes. In fact, the Grenade Launcher is the only ranged weapon in Quake that does not travel in a straight path toward its target. Despite this simplicity, or perhaps because of it, the Quake arsenal has become quite iconic, and the Rocket Launcher in particular is an object of affection for many Quake fans.

Quake items can be divided into two types: Health and Armor Pickups, which provide beneficial effects that are generally permanent, and Power-ups, which grant abilities in 30-second durations that are often extremely powerful. It is also worth mentioning that Quake marks the first appearance of Quad Damage, a power-up which would become synonymous with the Quake franchise.

The enemies of Quake are a diverse bunch, ranging from rather mundane undead soldiers, to hideous yeti monsters and bouncing blue blobs. The only unifying trait is that they are all thirsty for blood, and the fairly simplistic Quake AI will compel them to pursue the player's death with little or no regard to their own safety. As in Doom, most Quake monsters can be coaxed into infights with one another, and maximizing the chances of this is one of the best ways to soften the game's difficulty.

The bosses of Quake represent the game's most overtly Lovecraftian influences, as the names of both appear to be allusions to the Cthulhu mythos. While their behavior is no more complicated than that of Quake's normal monsters, neither can be defeated by normal means, requiring a special task be performed in order to kill them.

Quake's original score was written and performed by Trent Reznor (credited as "Trent Reznor and Nine Inch Nails"); Reznor was also credited with creating the sound effects for the game. Trent was apparently a big fan of the original Doom games, which led to his collaboration with id Software on the soundtrack for Quake. As an in-game nod to him, the Nine Inch Nails logo appears on all of the game's nailgun ammunition boxes.

* The first "track" on the disc actually contains the game's data files.

Dopefish can be found in E2M3: the Crypt of Decay.

Since the Quake code is open source, there are plenty of ways to play Quake on modern hardware and operating systems.

Pro tip: This guide on Quaddicted explains how to get pixelated visuals. 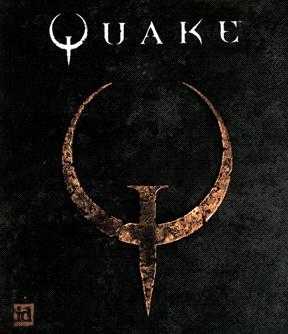