The third and final episode of this Bandai Namco Japanese RPG series, released in 2006 for the PlayStation 2.
PlayStation 2

Xenosaga: Episode III is the third and final installment of the Xenosaga series. It's subtitled "Also Sprach Zarathustra" (Thus Spoke Zarathustra), which like its predecessors, is taken from a Friedrich Nietzsche written work.

Episode III takes place one year after the events of Episode II. During that year Shion Uzuki resigned as Chief of First R&D at Vector to join an underground organization called Scientia. The game begins six months after Shion leaves Vector as Scientia infiltrates Vector's S-Line Division. Shion, along with the help of Shion's former assistant Miyuki, a special realian named Canaan, and the leader of Scientia Doctus, are on a mission to steal valuable top secret Vector data in order to find out more about Shion's father, the U.M.N., Gnosis terrorism, and how everything links together.

After barely making it out alive, Shion goes to the beach to relax where she receives a message from her old colleague Allen Ridgely with an update on the KOS-MOS development project and is invited to visit Fifth Jerusalem where the project had been transferred to. KOS-MOS was placed into the hands of the military and about to be put up against the federation's latest weapon.

The battle system in Xenosaga Episode III is a traditional menu based battle system, this is a marked departure from the "Zone" based battle system found in Episode II. The AP/Stock system from the previous games has been removed and returning is a streamlined version of the break system that has a gauge of its own. A character can now use the BOOST system to jump in line and be the next to perform an action, or build them to perform a more powerful attack.  Also new to Episode III is the "Character Change" option which allows you to swap attacker characters with reserve characters whenever you like when it's their turn.

ES battles have also received an overhaul.  ES actions are limited per turn by an energy gauge, and certain actions consume a set amount.  Energy is upgradable as the game progresses.

As you attack, an "Anima Gauge" builds up, and when it becomes full, your ES can unleash the power of the Anima contained within, and perform special Anima Attacks which deal much more damage than your standard attack.

WIthin Xenosaga Episode III, you will find arcade looking machines where you can play a 3D puzzle minigame called "HaKox".  HaKox is a game where you move characters to their respective goals. Completion of stages within HaKox will result in winning useful, and some rare items one cannot find elsewhere in the game. 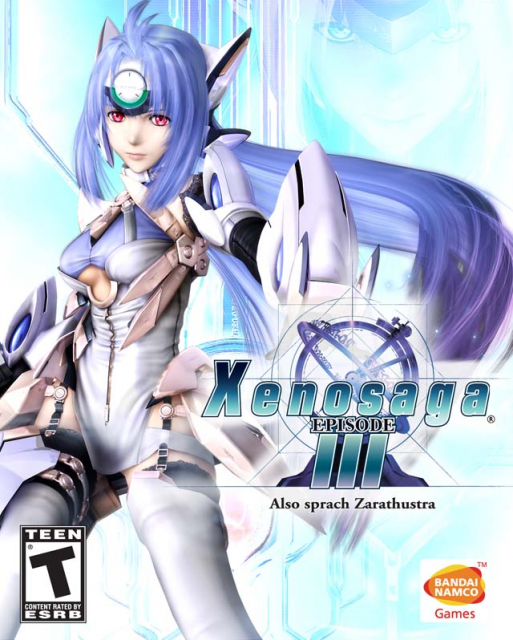