Genso Suikoden, a Japanese RPG, was one of the first role-playing games released for the PlayStation console. The game puts you in the role of a young hero who finds himself leading an army of rebels trying to overthrow a corrupt empire. The game features over 108 recruitable characters.

Suikoden was developed by Konami KCE-Tokyo and directed by Yoshitaka Murayama. Originally planned as a single game, it has gone on to spawn five sequels and multiple spin-offs. The game was first released in Japan in December 1995, United States in December 1996, and Europe in 1996 for the Sony Playstation. In 1998, the game was released for both the Sega Saturn (Japan) and the PC (Japan, China, and Korea). In its lifetime, Suikoden has sold roughly 216,542 copies.

In 2008, it was released as a PSone Classic on the PlayStation Network. A Japanese-only mobile version was released the same year.

The game is set in a fantasy world resembling feudal China. It begins in Solar Year 455 and ends in 457. The game follows the adventures of Tir McDohl, a young staff fighter. He learns early on that he is destined to be the "Tenkai Star", a prophesied hero that will unite the 108 Stars of Destiny and bring forth a new age of prosperity. Throughout the game, Tir learns of the 27 True Runes, which hold great power. These same runes, if in the wrong hands can be used to destroy or enslave the world. Early in the game, Tir inherits the Rune of Life and Death, also known as "Soul Eater", which grants him great power, but that power comes at a price.

Tir and his entourage encounter many enemies throughout the game. Their main foe is the Scarlet Moon Empire. Tir's father, Teo McDohl is one of the Six Great Generals of the Scarlet Moon Army. Tir briefly joins the army, but soon becomes entangled with a rebel force known as the Liberation army. Tir and his friends join the rebel army after learning of its' goals and the tyrannous ways of the empire. They then begin the long journey to stop to the empire's evil ways, and restore it to its former glory.

Suikoden was one of the first (traditional) RPGs for the Playstation. There are three types of combat in Suikoden: standard turn-based, large army battles, and one on one duels. The turn-based battles are much the same as any traditional Japanese RPG, giving the player time to choose their actions and fight at their own pace. The large scale army battles work on a glorified rock, paper, scissors type system, with players choosing from 3 different units and going against the enemy's unit until one side defeats the other. The one on one battles work largely the same as the army battles with the player choosing one of 3 different attack types each turn. A wrong choice in any battle could result in the permanent death of one of the 108 stars. Losing one of the main characters effects the outcome of the game.

The major goal in the game is to recruit all 108 stars while progressing through the story. All of the 108 are usable at any time after they have recruited. Some of the characters you recruit are Active, meaning that you will be able to add them to your six person entourage. Others are Passive, meaning that they are not available for your entourage. Passive characters will stay at your headquarters and setup five different kinds of stores. Those stores are a blacksmith, an appraiser, an armorsmith, a runemaster, and general goods. Other passive characters will be available for mini-games such as a dice game, a memory game or a coin-and-cup game. Others serve as an outlet to customize your menu window theme, sound theme, and bathhouse decorations. There are many characters who serve as both Active and Passive.

A major perk of the game was the ability to transfer your data from Suikoden I to its sequel, Suikoden II.

The Suikoden soundtrack was released as 2 discs and with 48 tracks on April 5, 1996. Published by King Records and was composed and arranged by Miki Higashino, Tappy Iwase, Taniguchi Hirofumi, Mayuko Kageshita and Hiroshi Tamawari. The Suikoden Soundtrack was only released in Japan.

The 108 Stars of Destiny

The following is a complete account of all the characters that will join your quest.

The game's success led to the creation of the Suikoden franchise of games, novels, and anime.

Deus Ex creator Warren Spector has credited Suikoden as a big influence on his work, even as early as the first Deus Ex (see here and here). He stated that the limited moral choices in the game, some of which turn out to be false choices, are what inspired him to explore the concept much further and attempt to offer meaningful choices that actually matter. In turn, modern choice-based role-playing shooters like Mass Effect and Fallout 3 are considered "descendants" of Deus Ex. 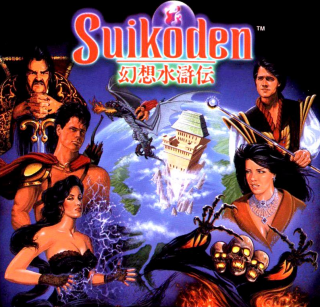